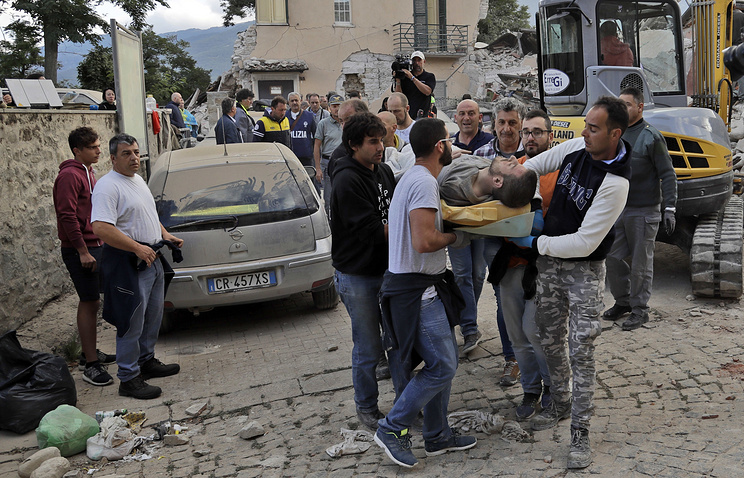 A major earthquake that hit mountainous central Italy today has left at least 21 people killed, while 100 are missing, local media reported. The 6.0 magnitude quake struck in the early hours of Wednesday devastating a number of mountainous towns and villages.
Earlier today, Italian news agency Ansa reported eleven people had been killed in the mountainous area of northern Lazio: six in Amatrice and a further five in Accumoli.

A further ten are reported dead in Pescara del Tronto, in the Marche region. Countless others are still trapped beneath the rubble of collapsed buildings.

The relief effort is underway but the death toll looks set to rise as emergency services are yet to reach some of the damaged areas.

“The situation is dramatic, there are many dead. I cannot give a toll for now because rescue efforts are under way and it is very, very difficult,” said Amatrice mayor Sergio Pirozzi.

According to local officials, two people have been confirmed dead at Arquata, five at Amatrice and two in Accumoli with a number of people unaccounted for in all three locations.

The first earthquake struck at 3.36am in Norcia, a town south of Perugia, Umbria, at a very shallow 10km depth, according to the USGC, and was followed by a 5.4 magnitude aftershock an hour later.

“Half the town is gone, people are under the rubble,” the mayor of Amatrice told RaiNews24. “Access roads are blocked.”

Two people are reported dead in Pescara del Tronto, in the Marche region, east of the epicentre. They are said to be an elderly couple whose home collapsed.

One person is also reported to have died in Accumoli and two bodies have been retrieved beneath rubble in Amatrice.

“We have a tragedy here,” the town’s mayor, Stefano Petrucci, told AGI.

“For the moment one death is confirmed but there are another four people under the rubble and they are not responding. It is a disaster, we have no light, no telephones, the rescue services have not got here yet.”

Italy’s civil protection agency described the quake as “severe”. The agency has activated an emergency number – 800 840 840.

A statement from the government said that that Italy’s civil protection agency had called a special meeting on Wednesday morning to co-ordinate a response to the disaster. The Italian Prime Minister is following developments from Rome.

Strong tremors lasting about 20 seconds were also felt in Rome, and again about an hour later.

“My bed started to shake and the door was shaking, it was very scary,” said one resident.

A group of panicked neighbours gathered on a street in the Flaminio area shortly after the second aftershock.

“This brings back memories of L’Aquila – we could feel the tremors here, although much stronger,” one told The Local.

“After the first tremor, I prepared some things but tried to get back to sleep. After the second, I decided to just leave the building.”

The 6.3 magnitude quake in L’Aquila, Abruzzo, in 2009 killed 308 people and left more than 1,500 injured. Italy has two fault lines, making it one of the most tectonically active countries in Europe.