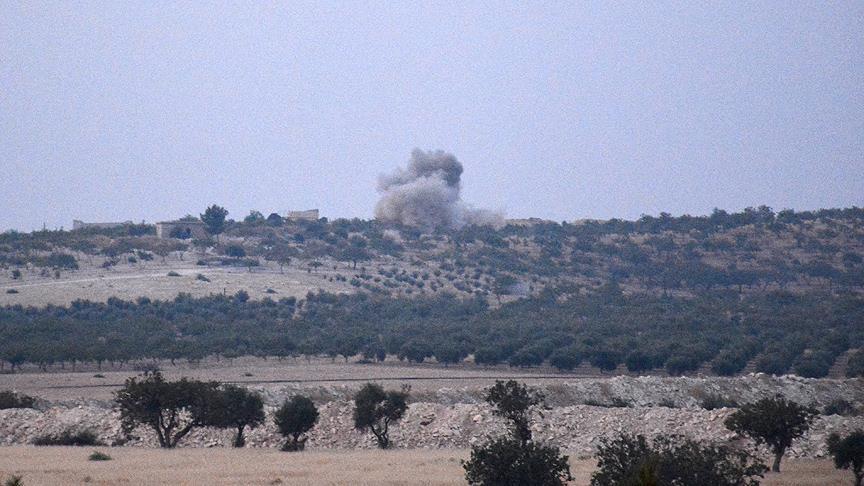 Turkey’s army backed by international coalition air strikes today launched an operation involving fighter jets and tanks to drive Islamic State jihadists out of a key Syrian border town. The air and ground operation, the most ambitious launched by Turkey in the Syria conflict, is aimed at clearing jihadists from the town of Jarabulus, which lies directly opposite the Turkish town of Karkamis, the prime minister’s office said.

The operation, named “Euphrates Shield”, began around 4:00 am local time (0100 GMT) with Turkish artillery pounding dozens of IS targets around Jarabulus. Turkish F-16 fighter jets and coalition war planes also hit targets inside Syria while an AFP photographer then saw around a dozen Turkish tanks cross into Syria to support the operation.

Tensions had flared across the Syria-Turkey border the previous day following rocket fire from Jarabulus which landed inside Turkey, with the Turkish army firing howitzer rounds in response.

The operation also appeared aimed at pre-empting any assault on Jarabulus by pro-Kurdish militias, who also oppose IS but are accused by Turkey of seeking to carve out a Kurdish region in northern Syria.

“God willing, we will get a result in a short time” to kick IS out of Jarabulus, Interior Minister Efkan Ala told the state-run Anadolu news agency, saying Turkey was working with coalition partners and moderate Syrian opposition.

Turkish authorities had late Tuesday ordered the evacuation of Karkamis for safety reasons, raising expectations that an offensive was imminent.

The AFP photographer in Karkamis saw 11 Turkish tanks crossing the frontier and then firing on Jarabulus. They were followed by several smaller military vehicles believed to be carrying pro-Ankara Syrian rebels who had also crossed over.

Syrian activists have said hundreds of pro-Ankara rebel forces are waiting on the Turkish side of the border to take part in a ground operation to seize Jarabulus from the jihadists. Air strikes by Turkish jets also echoed through the skies. The effects of one air strike on the northern outskirts Jarabulus were easily visible, sending up a cloud of black smoke and sand.

Turkey will want to show with the operation that it is serious about taking on IS, which has been blamed for a string of attacks inside the country, the latest a weekend attack on a Kurdish wedding in Gaziantep that left 54 dead.

Ankara was long accused of turning a blind eye to the rise of IS in Syria and even aiding its movements to-and-fro across the border, claims the government had always vehemently denied. The launch of the operation comes as US Vice President Joe Biden arrived in Ankara to meet Turkish President Recep Tayyip Erdogan, with agreeing a unified strategy on Syria set to be a crucial issue.

Biden is likely to face expressions of alarm from Turkey about the activities inside Syria of the People’s Protection Units (YPG) militia, which Washington sees as an ally but Ankara regards as a terror group.

Saleh Moslem, the head of the Democratic Union Party (PYD), the YPG’s political wing, tweeted that Turkey was now in the “Syrian quagmire” and would be “defeated” like IS.

The air strikes by Turkish F-16s were the first such assaults since a November crisis with Russia sparked when the Turkish air force downed one of Moscow’s warplanes. A dozen IS targets were completely destroyed in the air strikes. Turkish artillery meanwhile destroyed 70 IS targets, television said.

Security sources quoted by Turkish television said a small contingent of special forces travelled a few kilometres into Syria to secure the area before a possible larger ground operation.

The incursion by Turkish special forces and tanks is the first such into Syria since February 2015, when hundreds of Turkish troops crossed the border to move the relics of the grandfather of the founder of the Ottoman Empire.

The movements have come at a critical juncture for Turkey in Syria’s five-and-a-half-year war, with signs growing it is on the verge of a landmark policy shift.

Ankara has always called for the removal of President Bashar al-Assad, putting Turkey at odds with his main supporters Iran and Russia. However Prime Minister Binali Yildirim acknowledged at the weekend for the first time that Assad was one of the “actors” in Syria and may need to stay on as part of a transition.

Turkey has been shaken by one of the bloodiest years in its modern history, with a string of attacks by IS jihadists and Kurdish militants and the botched July 15 coup. The attack Saturday on a wedding party for a young couple has horrified the country, with the majority of the 54 victims aged under 18 and including children as young as four.

Earlier today, Anadolu news agency reported that Turkey has launched a cross-border operation in Syria against the Daesh terrorist organization, quoting Turkish authorities. The news agency also mentioned that the operation comes in response to terrorist attacks on Turkish soil and artillery fire by Daesh militants in Syria on targets inside Turkey.

Turkish Armed Forces is responding to artillery fire and carrying out airstrikes against Daesh elements in Jarablus — part of Aleppo governorate — in a retaliatory strike, officials said.

The operation is in line with the country’s rights to self-defense borne out of international treaties and a mandate given to the Armed Forces by the Turkish parliament in 2014 and extended for another year in September 2015, according to officials.

At the time, the mandate said threats to national security along the southern border increased with a significant rise in terrorist elements in Syria and Iraq.

It also cautioned against mass migration risks that soon materialized when Turkey last year was faced with tens of thousands of civilians fleeing Aleppo amid a scourge of violence, in addition to the millions of refugees already housed in camps and cities across the country. The humanitarian situation in Aleppo has deteriorated to alarming new lows since then, prompting renewed zeal for international action by the United Nations amid a dysfunctional aid delivery mechanism clogged by a failure of diplomacy.

In resolution 2249, unanimously adopted last November, the 15-member Security Council condemned in the strongest terms Daesh’s “gross, systematic and widespread abuses of human rights, as well as its destruction and looting of cultural heritage”.

Those responsible for terrorist acts or human rights violations — including Daesh, Nusra Front and al-Qaeda-linked groups — must be held accountable, the body said.

Ankara officials say Turkey is engaged in an act of legitimate self-defense, which is one of the two exceptions to the inviolability of national sovereignty enshrined in the UN Charter. The second is a UN Security Council mandate for military action.

According to Article 51 of Chapter 7, in the case of an armed attack against a member state, that state has the right for self or collective defense until the UN Security Council has taken measures to maintain international peace and security, and no UN article can nullify that inherent right.

Today’s operation, which began at around 4 a.m. local time (0100 GMT), is aimed at clearing the Turkish borders of terrorist groups, helping to enhance border security and supporting the territorial integrity of Syria, officials said.

Preventing a new flow of migrants and delivering aid to the region’s civilian population in need are also among the goals, they added.

The move comes after a series of mortar bombs landed in a residential Turkish area along the Syrian border beginning Tuesday morning, security sources said. There have also been a number of deadly Daesh attacks in Turkey over the past two years that killed scores of civilians and security officials.

There were no injuries Tuesday in Karkamis, which lies approximately 1 kilometer across the frontier from Jarablus, where Free Syrian Army forces are fighting to take control of the city from Daesh.

Operations by Turkish Armed Forces, which has been actively fighting Daesh, have significantly contributed to ongoing efforts of U.S.-backed international coalition against the terror group.

Another important issue that the Security Council highlights is the threat posed by foreign terrorist fighters. The Council took steps in 2014 concerning the issue and has since then issued decisions aimed at stemming the flow of fighters joining terror groups.

The fact that approximately 25,000 foreign terrorist fighters from more than 100 nations have joined Daesh as a consequence of the conflict in Syria and Iraq, has been included in Security Council documents.

To find a solution for this problem, it was stressed multiple times that source countries should designate the foreign terrorist fighters while they are within the country and not allow them to leave.

Turkey has taken crucial steps in that regard and placed more than 37,000 individuals on a no-entry list between 2011 and February 2016. More than 3,000 foreigners who had entered Turkey through illegal ways, were deported for suspected ties to terrorist organizations.

Also, 7,500 foreigners were checked by Risk Analysis Centers established, with more than 1,700 sent back to their countries of origin.

In addition, as part of operations by Turkish law enforcement officials against terrorist groups, 2,433 individuals — of whom 1,030 are foreigners — were detained and 808 of the total number were arrested for having links to Daesh.

Turkey also increased its physical security precautions along its border with Syria.