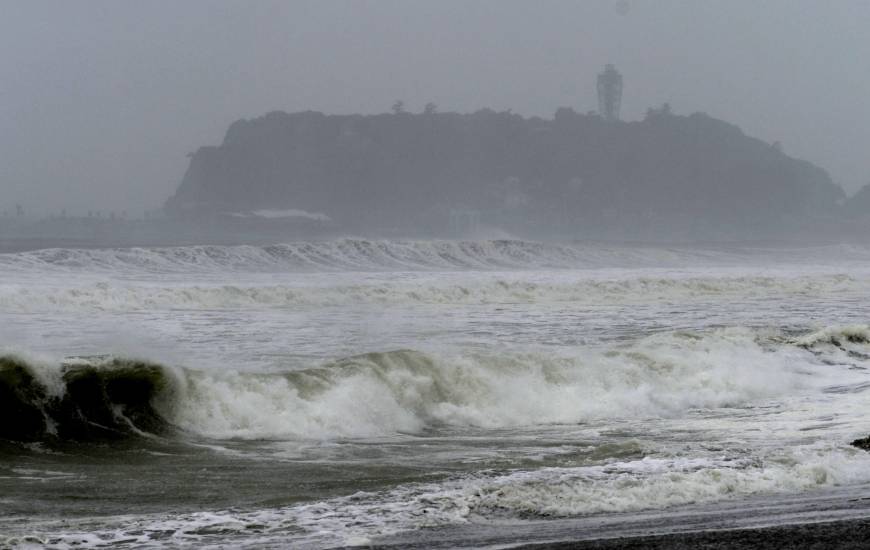 Storm water coursed down usually placid rivers and left many streets flooded in the Kanto region. As of Monday evening the typhoon was heading north, where it is expected to hit the Tohoku region and Hokkaido on Tuesday.

The Kanagawa Prefectural Police said a 58-year-old woman in Sagamihara was found clinging to a guardrail on flooded National Route 129. She was swept away by the water. Although firefighters were able to rescue the woman who was then take unconscious to a hospital, she died later in the day.

Staff at Narita International Airport abandoned the control tower when winds reached 126 kph, a Transport Ministry official said. The move shut down the airport for about an hour.

The typhoon, the season’s ninth, landed near Tateyama on the Boso Peninsula in Chiba Prefecture at around 12:30 p.m., the Meteorological Agency said.

It had maximum sustained winds of 126 kph and gusts as high as 180 kph. It was the equivalent of a category 1 hurricane, the weakest on the Saffir-Simpson hurricane scale.

The Meteorological Agency issued heavy rain and flood warnings for all 23 wards in central Tokyo, while the Prime Minister’s Office warned of possible landslides and damage from strong waves.

Japan Airlines canceled 148 domestic flights Monday, while All Nippon Airways scrubbed 96 flights, affecting a total of about 49,000 passengers, according to statements from the carriers.

Train services were delayed or canceled in the morning in greater Tokyo and the Tokai region around Shizuoka Prefecture. Odakyu Electric Railway Co. services halted between Tokyo and Hakone, Kanagawa Prefecture. The Yamagata Shinkansen Line ceased operating along a section between Fukushima and Shinjo, Yamagata Prefecture.

The weather agency warned of mudslides and floods as well as lightning and strong gusts.

A tree fell at JR Harajuku Station in Shibuya Ward, Tokyo, hitting the platform roof and an overhead cable. Pieces of the roof were scattered on the platform, and trains were suspended on the JR Yamanote Line.

A little after 11:30 a.m., a mudslide near the Seibu Tamako Line in Higashimurayama, western Tokyo, derailed a four-car train between Musashiyamato and Seibu Yuenchi stations. No injuries were reported among the six passengers aboard, the police said.

The line was closed and the passengers walked to Musashiyamato Station.