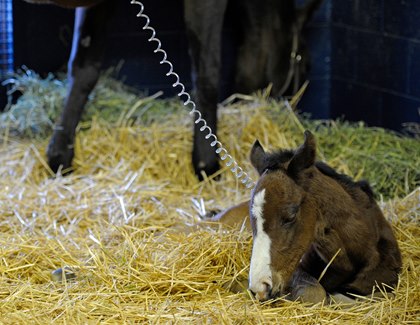 Placentitis, an infection of the placenta, is the leading cause of pregnancy loss in mares and neonatal death in the first 24 hours of life. Foals that do survive to parturition still have hurdles to overcome; many are born with a life-threatening infection called sepsis. Sepsis in foals has a high mortality rate and requires highly specialized, labor-intensive care. Identifying disease and making the decision to treat these foals, however, can be challenging due to the subtlety of early clinical signs.

So researchers at the University of Illinois are testing a new diagnostic marker of neonatal disease: alpha-fetoprotein (AFP). Melissa Prell, DVM, who completed a rotating internship at the University of Illinois (U of I) Urbana-Champagne and has since started her residency at Colorado State University’s Equine Reproduction Laboratory, presented her and her colleagues’ work on this marker at the 2016 Theriogenology Conference, held July 27-30 in Asheville, North Carolina.

Alpha-fetoprotein is a protein the fetus produces early in gestation that continues to be present into the third trimester. Researchers have recently determined that AFP levels increase in the plasma of mares diagnosed with ascending placentitis, Prell explained.

“To improve the management of septic foals, we’re exploring the advantages of AFP as a marker for sepsis,” she said. “Foals infected in-utero will be born septic. So, by using markers such as AFP, we may be able to identify sick foals early on and initiate treatment more rapidly. We hypothesize that AFP is present in high concentrations in the fetus and that it will also be increased in plasma of foals suffering from neonatal disease.”

In their study, Prell and her team first had to determine normal AFP ranges in healthy neonates, so they collected blood samples from 16 clinically healthy newborn Standardbred foals daily for seven days to measure and chart their AFP concentrations. They found that AFP decreased significantly from birth to Day 7. These figures served as the group’s baseline for normal.

Then, the team collected samples from Standardbred foals born at the U of I and combined them with samples collected from Thoroughbred foals at Rood & Riddle Equine Hospital, in Lexington, Kentucky, within 24 hours after normal delivery. An experienced veterinarian examined all the foals and separated them into two groups based on physical exam findings and blood test results: healthy (41) or clinically septic (9). Prell said AFP levels were significantly higher in the septic group when compared to the healthy group.

“Our findings suggest that AFP may serve as a useful marker that can be utilized to assess neonatal health soon after birth,” she concluded. “Its uniqueness for being present in high concentrations both in the fetus and newborn foal may open a new field of investigation in understanding and preventing neonatal losses in horses.”