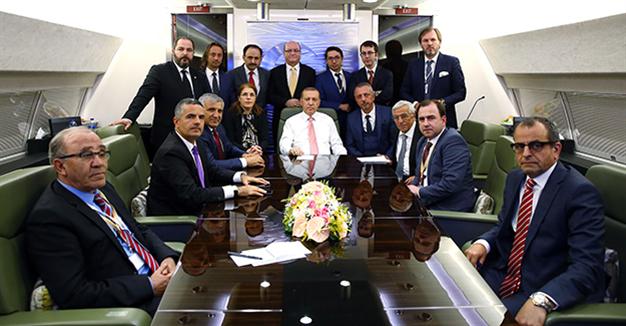 Turkey and Russia have moved to build a new mechanism between the two countries on Syria after acting to soothe strained relations at a summit in St. Petersburg, announcing plans to hold their first Syria-related meeting today.

“We said we would send [Russia] a tripartite committee featuring an intelligence [officer], soldier and a diplomat, and in response to this tripartite committee, you will name your counterparts and they will conduct intense work,” Turkish President Recep Tayyip Erdoğan told a group of journalists on Aug. 9 aboard his presidential plane while traveling from St. Petersburg to Ankara after meeting Russian counterpart Vladimir Putin.

Erdoğan and Putin’s first face-to-face meeting came after Turkey downed a Russianfighter jet along its Syrian border for an alleged airspace violation on Nov. 24, 2015. The action prompted Russia to impose economic and touristic sanctions on Turkey.

After Erdoğan delivered a letter to Putin in which he stated his regrets over the downing of the jet, an initiative was launched to restore the countries’ strained relations.

Erdoğan said the Turkish tripartite committee was scheduled to set off for Russia on Aug. 10 and would hold its first meetings today.

“Accordingly, these friends of ours will bring the infrastructure of the Syria process to a level,” said Erdoğan, adding that one of the topics to be discussed was the humanitarian aid to access Syria’s second city of Aleppo, where fierce fighting is continuing.

“There will be a second move after Moscow. The perspective and width of this move will be formed after the [initial meetings],” he added.

Hours after Erdoğan’s remarks, Turkish Foreign Minister Mevlüt Çavuşoğlu confirmed the new mechanism to be composed of the intelligence services, foreign ministries and militaries of the two parties.

“[This is] the first concrete step [between Turkey and Russia]: Previously, there were different mechanisms between us on Syria, between the militaries, foreign ministries and intelligence services. Now, we [will] establish a threefold mechanism,” Çavuşoğlu told the state-run Anadolu Agency on Aug. 10.

Turkish National Intelligence Organization (MIT) chief Hakan Fidan and representatives from the Foreign Ministry and Turkish Armed Forces (TSK) will depart for Russia late on Aug. 10 for the meeting in St. Petersburg, he added.

Apart from the mechanism, the Turkish and Russian chiefs of General Staff have also agreed to establish a direct line of communication in order to avoid a repetition of unwanted incidents over Syria like the downing of the Russian warplane on Nov. 24, 2015.

“We have agreed to be in close contact in order to avoid such incidents. In this frame, our Chief of General Staff and the Russian chief of general staff have re-established a direct line. They are in talks on this,” İbrahim Kalın, the spokesman for Erdoğan, told the private broadcaster A Haber on Aug. 10.

“I don’t know whether this line is a red or a black line. They are in close contact on Syria, bilateral relations and regional issues as well as air space,” he said.

Although Turkey and Russia have different views on Syria, they are on the same page regarding the declaration of a cease-fire, providing humanitarian aid and finding a political solution, Çavuşoğlu said.
“There could be other thoughts on how to reach a cease-fire. We are particularly rejecting attacks against civilians. We also do not approve attacks on moderate opposition but on terror organizations. We also do not approve the siege of Aleppo,” Çavuşoğlu said.

Recalling that Russia and the Syrian regime had carried out bombings on places where civilians and the moderate opposition were the majority, he said: “We made our warnings to Russia on this. Especially, al-Nusra and the moderate opposition should be distinguished in places where they are closely located.”
Turkey’s top diplomat underlined the country regarded radicalization in Syria as dangerous, as in the rest of the world, recalling that talks with Russian authorities would focus on the need to distinguish moderate groups from terrorists.

Exchange of information on Syria

Turkish authorities will inform their Russian counterparts about the locations of civilians and moderate opposition groups and will request it to first focus on the fight against the Islamic State of Iraq and the Levant (ISIL) in Syria, he stated.

The problem in Syria cannot be resolved solely by the efforts of Turkey and Russia, he added, calling for straight talks for the accomplishment of a political transition period.

Not alternative to West

Çavuşoğlu also underlined that Turkey’s reconciliation with Russia should not be read as a message to the West. “We are doing it for our interests, for regional interests. We are actually issuing our messages to the West in a clear way,” he said.

“Many of them [European countries] have shown whether they are our true friends or not after the coup attempt. The future of our ties with the EU and Western countries will not have an effect on our future ties with Russia. Or vice versa,” he said.

Çavuşoğlu said Turkey had been facing political obstacles from the EU over the last 15 years. “If the West loses Turkey one day, it will not be because of Turkey’s good ties with Russia, China, Central Asian or Islamic countries but because of [the West’s] mistakes.