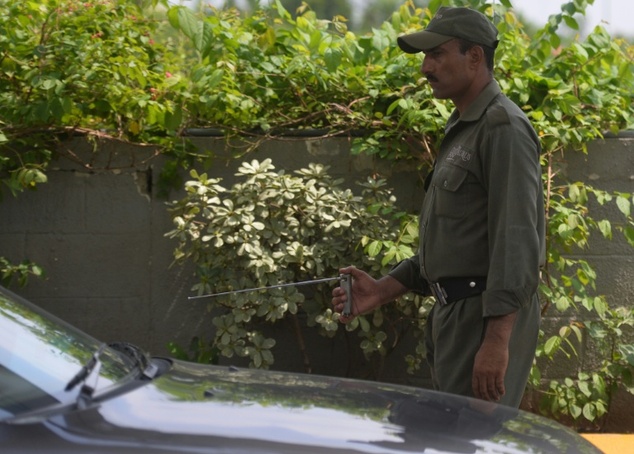 A roadside bomb hit a Pakistani security vehicle and wounded 13 people today in the south-western Pakistani city of Quetta, days after a suicide bombing at a hospital killed at least 74 people, most of them lawyers, officials and media said. Home Minister Safaraz Bugti said the homemade bomb targeted police personnel escorting a judge, who was not hurt in the attack, in the frontier city. “It was a judge’s car that was passing, but I believe it was the police who were the target,” he said on Pakistani TV. “It was a remote-controlled device with 3-4 kg of explosives… I think these kinds of cowardly acts will not reduce our morale,” Bugti said.

On the other hand, AFP has mentioned that Pakistan’s government will face a grilling in the senate over its continued use of bogus bomb-detectors to secure high-value facilities, a lawmaker said today, claiming the devices “endangered the lives of millions”.

A Pakistani government agency has built and sold more than 15,000 of the so-called “Khojis” bomb detectors, earning millions in revenue. But the technology they use was exposed as a sham years ago in a global scandal.

“The continuous use of bogus bomb detectors to secure high-risk facilities such as airports and government installations has recently come to light in the media,” said opposition Pakistan People’s Party senator Sherry Rehman, referring to an AFP report that drew attention to the issue this week.

“This is a serious security risk that endangers the lives of millions of people and merits an immediate response from the Minister on the floor of the House,” she wrote in a formal notice to parliament.

Rehman said she would quiz the government on the issue at the next session of the senate on August 22. The government did not officially respond to AFP’s queries about the ongoing use of the device. But senior officials conceded off the record that they were ineffective.

Many creators of the original devices are serving long prison sentences for fraud, including British businessman James McCormick. His ADE-651 became a mainstay of security forces in Iraq, where $85 million was spent on them, before they were officially banned last month.

Pakistan’s variant device, known as the “Khoji”, claims an accuracy level of 90 percent, but uses the principles of radiesthesia, or dowsing, which experts consider junk science.

“These ‘magic wands’ are based on the same crackpot science that is behind dowsing, the ability to detect underground water with birch twigs. Powerful vested interests are behind the scam and somebody somewhere is getting very rich at the expense of the safety and security of all of us,” the paper wrote.