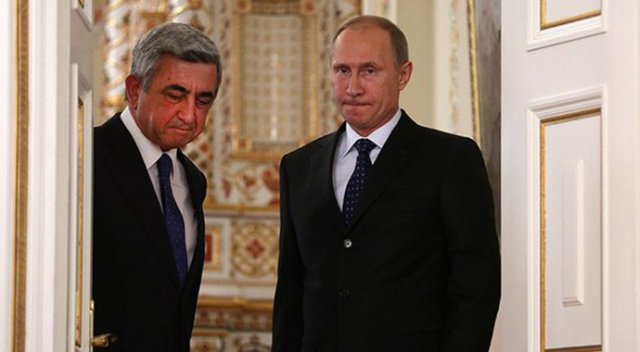 Russia, Armenia leaders to meet in Moscow for talks on bilateral, regional issues

Russian President Vladimir Putin and his Armenian counterpart Serzh Sargsyan will meet today to discuss political, economic and humanitarian cooperation as well as to focus on some international and regional issues, the Kremlin press service reports.

The Armenian leader will visit Moscow at the invitation of the Russian president, the press service said. “At the summit talks the sides plan to discuss key issues of cooperation in political, trade-economic and humanitarian sectors, to look into how integration processes advance in Eurasian space,” the report said, adding that topical international and regional issues were also on the agenda.

Earlier this week, the Russian president visited Baku, meeting with the Azerbaijani and Iranian leaders, Ilkham Aliyev and Hassan Rouhani – in trilateral and bilateral formats. Focusing on the settlement in the mostly Armenian populated Azerbaijani enclave of Nagorno Karabakh, Putin said Russia would seek to see that Azerbaijan and Armenia find an acceptable for both sides solution.

“You mentioned Karabakh. This is really a problem that we got from our Soviet past. I know how acute this issue is for both Azerbaijan and Armenia,” Putin said at the meeting with Azerbaijani President Ilham Aliyev.

“We will do everything possible so that Armenia and Azerbaijan reach a compromise acceptable for both sides, so that the peoples of the two countries win from this, and so that both countries feel that they have resolved this difficult issue in the interests of current and future generations,” the Russian president noted.

A trilateral statement adopted following meeting of the Russian, Azerbaijani and Armenian presidents in St. Petersburg on June 20 confirmed the parties’ commitment to normalizing the situation along the contact line in Nagorno Karabakh.