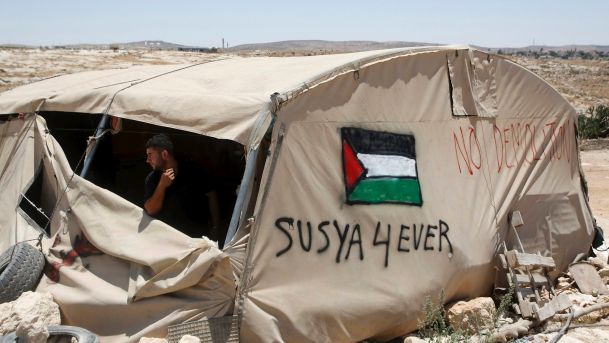 US to Respond Harshly if Israel Demolishes Palestinian Village Sussia

Palestinian News agency WAFA reported that “US administration officials have informed officials in the Israeli Prime Minister’s Office that a severe American reaction would result if Israel destroys the houses in the village of Sussia, south of Hebron”.

The Israeli officials said similar messages were conveyed over the past two weeks by the European Union, the British government and other international bodies.

These messages included messages from British diplomats to the PMO and the Foreign Ministry that the British Foreign Office in London would find it difficult to continue assisting Israel in international forums in the event Sussia was demolished, the Israeli daily added.

The Israeli officials said international pressure over the matter came after the Palestinian Authority turned to the United States and a number of other Western countries, claiming that Israel intends to destroy the village in a few weeks.

According to the Israeli officials, the PMO informed the Americans and Europeans that at this stage there is no plan to destroy Sussia, and that the Israeli government would act in accordance with rulings by the High Court of Justice, which is now hearing a petition on the matter.

In March 2015, the Israeli government asked the High Court of Justice for permission to demolish the ancient Palestinian village of Sussia, south of Hebron, and relocate its residents to nearby Yatta town.

Prior to this, a petition was filed by the Regavim organization, funded by settler-group Amana and regional authorities in the West Bank, calling for what they described as Palestinian “illegal outposts” in Sussia to be demolished.

The petition criticized decisions made by the Civil Administration’s planning committee to reject an alternate plan suggested by Susia residents, stating that the relocation to Yatta was in Palestinians’ best interest.