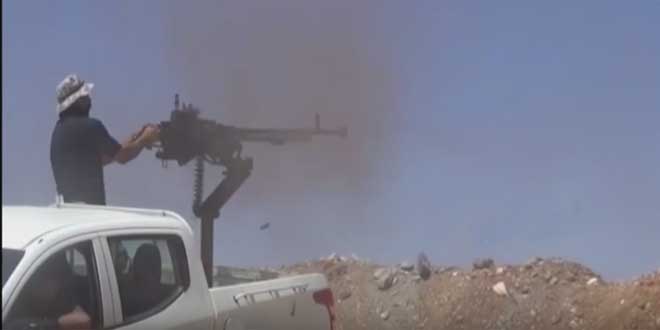 Terrorists killed in army operations in Quneitra and Damascus Countryside

The Syrian army has stepped up operations against terrorist organizations in various provinces, mainly in Aleppo, inflicting heavy losses upon their ranks where many terrorists are getting killed and their weapons and vehicles are being destroyed, according to SANA.

Over the past few hours, units of the army and the armed forces carried out intensive operations against terrorists’ dens and positions on the military road between the villages of al-Hurryia and al-Hamidyia and to the northeast of Um Batina and al-Hamidyia villages in the southern countryside of Quneitra.

A military source told SANA that a number of terrorists were killed and many others were injured in the operations, in addition to destroying a number of their vehicles.

Meanwhile a field source mentioned that an army unit and the popular defense groups in the towns of Khan Arnaba and Jaba clashed with terrorist groups after they attacked military posts in Tal Jaba and Tal al-Buzaq from the direction of the villages of al-Doha and Mas’hara.

The source added that the clashes ended with foiling the attack as a number of terrorists were killed and others were injured and their arms and military equipment were destroyed.

More terrorists were killed and their vehicles were destroyed in the farms of al-Dirbakhiyeh and Khan al-Sheeh and in the surroundings of Beit Jinn farm in Damascus Countryside.

Army units in cooperation with the popular defense groups inflicted heavy losses upon terrorists, destroying vehicles equipped with machineguns and artillery positions to the west of al-Saaf area in al-Salamiyeh in the eastern countryside of Hama province.