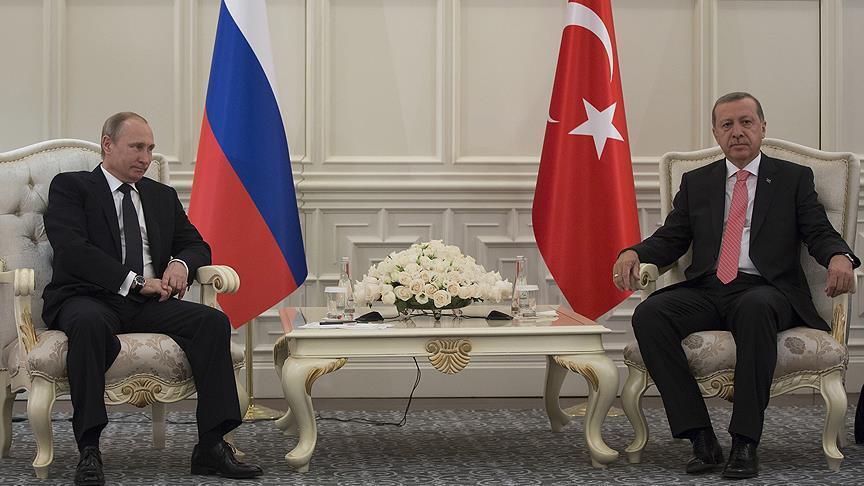 Turkey-Russia economic relations and the Syrian war will be the key topics to dominate next week’s visit to Russia by President Recep Tayyip Erdogan, analysts told Anadolu Agency on Sunday. Erdogan and President Vladimir Putin will meet on Aug. 9, their first such meeting following Turkey’s shooting down of a Russian warplane last November.

The Russian jet was fired on for violating Turkish airspace over the Turkey-Syria border, leading to a souring in relations between the two countries. The issue was largely resolved on June 29 through a letter and in subsequent telephone calls between the two leaders.

However, the two pilots who downed the Russian jet were arrested on July 19 over alleged links to the defeated July 15 coup in Turkey.

Russian political consultant Evgeny Minchenko said that the upcoming high-level meeting is very important but said the Syrian topic would not be easy to agree upon.

“I don’t expect any important decisions after this meeting. However some significant results in the economic sphere could be expected,” Minchenko said.

Frozen trade and economic projects will be back on the agenda, said Boris Dolgov, a senior fellow at the Center for Arab and Islamic Studies at the Institute of Oriental Studies of the Russian Academy of Sciences on Sunday.

Dolgov said that tourism, the economy, trade relations and the lifting of sanctions are expected to be discussed.

“I think the main political topic of the meeting will be Syria. Russia must abandon its support for the Kurds in Syria if they are expecting some steps from Turkey,” Dolgov added.

“Natural-gas pipeline projects, the construction of a nuclear power plant and tourism may be some of the topics which will be back on the table.”

Andrey Listovsky, general director of the Energy Development Fund, an independent engineering body involved in the Russian energy sector, said Putin and Erdogan’s meeting will bring the Turkish Stream project back to life.

Listovsky said that due to political instability in Ukraine, Russia wanted to stay away from that country on gas transit issues, adding: “That’s why Russia needs a new natural gas pipeline. The most important alternative is the South Stream, in other words, the Turkish Stream.”

He said that if Ankara did not show the same level of interest in the project as Russia did, “Russian experts should convince the Turkish side … If Russia can bring the project into prominence, Turkey would not refuse it”.

The Turkish Stream pipeline project, which was announced by Putin in Dec. 2014 during a visit to Ankara, plans to carry Russian gas via the Black Sea and Turkey to southeastern Europe.

Now, with the normalization of relations between the countries underway, the project is expected once more to be an important topic.

Although a major consumer of Russian gas, Europe’s perspective on the project remains skeptical. The new route would bypass Ukraine, a measure which is of concern to Europe in that Ukraine would lose its revenue from transporting Russian gas through its territory.

Professor Mesut Hakki Casin, lecturer on international relations and international law at Ozyegin University in Istanbul, said that Russia’s latest statements on Turkey are clear signs they are willing to improve relations.

“Turkey and Russia are currently under pressure to be isolated from the West in terms of politics and these circumstances could [have a] positive impact on relations,” Casin said.