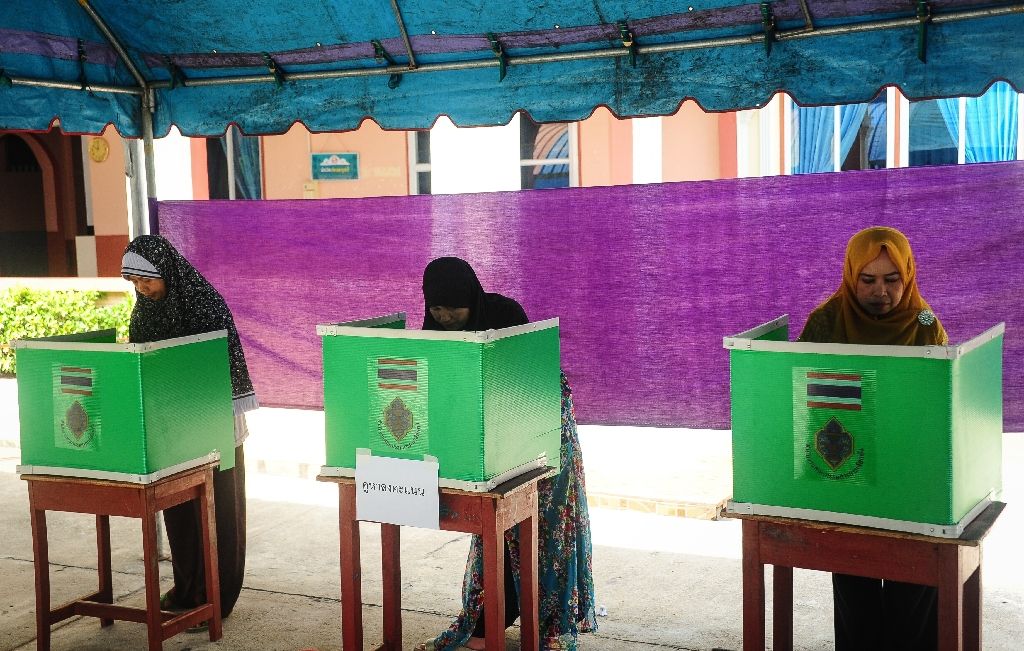 Victory for generals as Thais vote for junta constitution

Thailand voted today to approve a junta-scripted constitution, preliminary results showed, in a boost to the army’s political aspirations and a body blow to the country’s stuttering pro-democracy movement.

The military says its new constitution will curb endemic political corruption, bring stability after years of unrest and pave the way for a general election next year.

But critics say it aims to neuter civilian politicians and introduce a tethered democracy under the stewardship of the military and its royalist allies.

Partial results released by the Election Commission late Sunday showed 62 percent of voters had approved the charter, with 90 percent of votes counted so far.

Sunday’s referendum was the first time Thais have been able to go to the polls since former army chief Prime Minister Prayut Chan-O-Cha toppled the elected government of Yingluck Shinawatra in 2014.

The kingdom is split after a decade of political turmoil that has damaged growth, seen democracy shunted aside and left scores dead in rival street protests.

A triumphant junta leader Prayut Chan-O-Cha, who has struggled for two years to convince many Thais of his ability to unite the country, swiftly hailed the win as step towards “a bona fide democracy” free from graft.

In a terse message released through the prime minister’s office, he also hit out at “interference by foreign elements” using “malicious intent,” without naming the parties.

The United States, European Union and United Nations all criticised the junta’s bar on debate and campaigning in the lead up to the poll.

In a hint at the country’s stark divisions, pro-democracy social media users were quick to lament a result that kicks back aspirations of a return to full civilian rule.

“I want to tell Prayut that your victory is nothing to be proud of as your opponents had no chance to fight,” he told reporters, referring to the ban on campaigning before the vote.

Only the impoverished, rural northeast — a region that has voted in droves for successive Shinawatra governments turfed out by the army — and the deep south — hit by a Muslim insurgency — voted against the charter.

But millions came out in favour of the military’s charter, especially in the capital and the south.

Thailand has a long history of turbulence. The military has successfully seized power 12 times since the end of absolute monarchy in 1932 and this constitution will be the kingdom’s 20th.

But the latest chapter in the political crisis — dubbed the “lost decade” — has been particularly painful.

Since a 2006 coup toppled Prime Minister Thaksin Shinawatra, Yingluck’s billionaire brother who is now in self-exile, power has flipped between elected governments linked to him and rule by the army and its establishment supporters.

Shinawatra parties have won all general elections since 2001, scooping up votes by promising greater wealth and opportunity to the nation’s poor.

Sunday marked the Shinawatras’ first loss at the polls for 15 years.

The country’s tensions have been compounded by the frail health of 88-year-old King Bhumibol Adulyadej, as elites jostle ahead of the transition.

Junta opponents believe the charter will further warp democracy and deepen the divides.

The most contentious clauses call for a junta-appointed senate —

including six seats reserved for military commanders — to check elected lawmakers and increased powers for courts, which are already accused of political bias.

“The coup makers tore up the old constitution and robbed us of our rights, promoting themselves to control the government,” ‘No’ voter Ohm Kontaogan, 35, told AFP in Bangkok.

Prayut had promised to hold elections in the summer of 2017, whether or not the charter was passed.

But his previous election date promises have slipped.