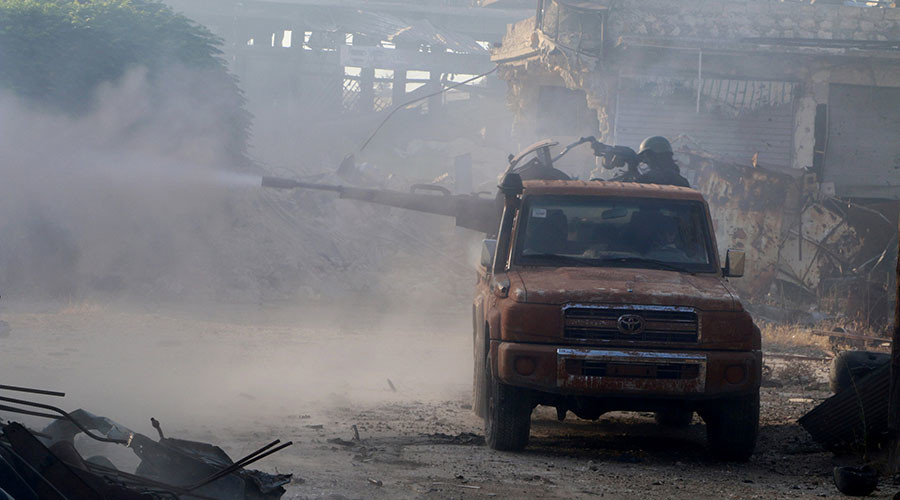 Syrian fighters from a rebel group considered ‘moderate’ by Washington are responsible for using toxic gas shells that killed seven and injured 23 in Aleppo on Tuesday, according to a statement from the Russian Ministry of Defense.

“On August 2, 2016 at 19 hours 05 minutes militants from the Harakat Nour al-Din al-Zenki group, considered by Washington as ‘moderate opposition’, launched poisonous materials from the Sukkari district towards the eastern part of Aleppo,” the ministry said.

It added that the territory is under rebel control and that shells were fired towards “the residential area” of the Salah-Eddin district.

Moscow informed Washington of the use of toxic shells on Monday, Lieutenant-General Sergey Chvarkov, head of the Russian Reconciliation Center in Syria, said.

On Tuesday evening, Syria’s state-run SANA news agency reported that Syrian officials said an attack using poisonous gas had occurred in Aleppo. A “terrorist attack” on the Old City of Aleppo with “shells containing toxic gas” led to the deaths of five and suffocation of eight more civilians, the outlet quoted the city’s health director, Mohamad Hazouri, as saying.

Meanwhile a chilling video purporting to show the aftermath of the deadly toxic shelling in Aleppo emerged online on Wednesday.

The footage captures the moment victims were rushed to hospital. Most of them appear unable to walk on their own and on the verge of fainting.

“We’ve taken 12 injured people, six other patients have already died from suffocation. Our doctors were prepared to treat people showing symptoms of gas poisoning. We’ve been expecting terrorists to use weapons of this kind,” a doctor at the Aleppo hospital told RT.

The gas in question was reportedly chlorine – a highly toxic substance that leads to breathing problems, a loss of consciousness, and illnesses among those exposed to it.

The al-Zenki rebel group was in the spotlight in July after two videos appeared online showing its alleged fighters taunting and then cutting off the head of a Palestinian boy. Washington promised to look into the incident and warned of ‘possible’consequences for the rebels.

“One indeed can ask the United States why it still continues to support this group,” Willy Van Damme, a Belgian journalist, told RT. He added that despite promises from Washington to look into the case, there has been “no reply” ever since.

In a separate incident, Tuesday media reports suggested that toxic gas had been dispersed in an area in which a Russian helicopter had been shot down, in Syria’s Idlib province.

The Kremlin said that it has no information on the issue adding that it’s not always clear what such claims are based on. The UN also said that it can’t confirm these reports, while Washington said that it is investigating the claims.

The Russian military official said that terrorists in the area are hampering the efforts of locals trying to flee the embattled eastern parts of the city.

“Terrorists are trying to prevent the population from fleeing the eastern part of the city of Aleppo the best they can, threatening to shoot civilians or publicly execute them. There are reports that children and women are being turned into suicide bombers to carry out terrorist acts,” Chvarkov stated.

According to the Russian Reconciliation Center, the situation in Aleppo “remains difficult.”

“The shelling of the city’s districts from the side of militants continues. Insurgents fired rocket launchers and homemade mortars at the ‘Castello’ shopping mall, the areas of Ansar and al-Hadher as well as the Leramon district,” it said.

According to the latest figures from the Russian military “372 civilians, including 76 children” were able to flee the areas controlled by illegal armed groups in Aleppo via safe routes. Humanitarian corridors were established last week through cooperation between Syrian forces and the Russian Center for Reconciliation in the country. Some 94 gunmen also laid down their arms, figures revealed.

Basic essentials and medical supplies are meanwhile being delivered by Russian convoys to residents of Aleppo, which is plagued by a dire humanitarian situation.