Home » Culture and history » From Russia with… Art 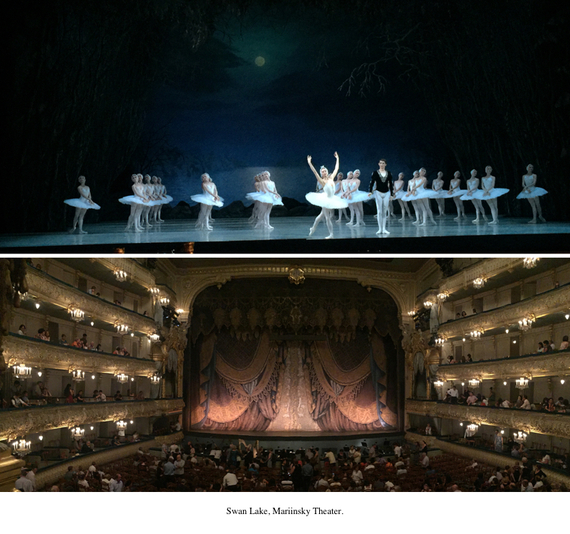 From Russia with… Art

If you hear me talking today with a heavier accent than usual, the explanation is simple: I’m back from a trip to Russia and still fighting the jetlag. I was travelling with a very interesting group of people — faithful and adventurous supporters of KCRW. We began our trip in St. Petersburg and then proceeded to Moscow. So let me start with St. Petersburg, the city where I was born and lived until 1977.

This was my third trip back home since then, and I was very pleased to find the city in much better shape compared to what I’ve seen in the past. The city was jammed with tourists eager to experience the so-called White Nights — the several weeks in June and July when daylight lasts almost until midnight.

We stayed in a hotel walking distance from the famous Bronze Horseman, the monument to Peter the Great. It was created by French sculptor Étienne Maurice Falconet and commissioned by Catherine the Great. For the last two centuries the sculpture has been the symbol of the city. Looking at its gigantic granite pedestal, one can’t help thinking about <Levitated Mass by Michael Heizer here at LACMA, where it was laboriously delivered along a 106-mile route that lasted 11 days. Just imagine the effort it took in the 18th century to drag The Bronze Horseman‘s gigantic granite pedestal, which is at least three times bigger than Levitated Mass.

The Hermitage Museum with its numerous buildings, including the Winter Palace of the Russian Tsars, is celebrated for its encyclopedic collection, stretching from ancient Egyptian, Greek and Roman art to the Italian Renaissance with paintings by Leonardo da Vinci and Raphael, and a sculpture by Michelangelo. And then there are more than two dozen paintings by Rembrandt, including The Return of the Prodigal Son, completed a few months before the artist’s death in 1669. My absolutely favorite painting in the entire museum.

There has been a dramatic change in the presentation of the late 19th/early 20th century French art. I remember it was displayed in relatively small rooms on the top floor of the Winter Palace. Now it’s moved across the Palace Square to the former General Staff Building where Impressionist and Post-Impressionist paintings, along with iconic early works by Matisse and Picasso, are exhibited to a spellbinding effect.

On the must-see list for any visitor to St. Petersburg is the Mariinsky Kirov Opera/Ballet Theater. And that’s where we went to see — what else but Swan Lake, still delivering its magic a hundred plus years after its original production on this very stage.

In the next few days, I hope to share with you a special photo album with hundreds of photos I shot both in St. Petersburg and Moscow. But today’s program I want to end with just two photos. The first is the interior of the 19th century Church of Spilled Blood, built on the spot where the Russian Tsar Alexander II was assassinated. We were invited to attend a special performance of liturgical music by the choir, and it was undeniably one of the most moving experiences of our trip to Russia. `

And the last photo is of the majestic Peterhof Park built for Peter the Great by Le Nôtre — the same architect who designed Versailles for Louis XIV. It’s up to you to decide which of these two Imperial fantasies is more glamorous.

Source: The Guardian
By: Edward Goldman