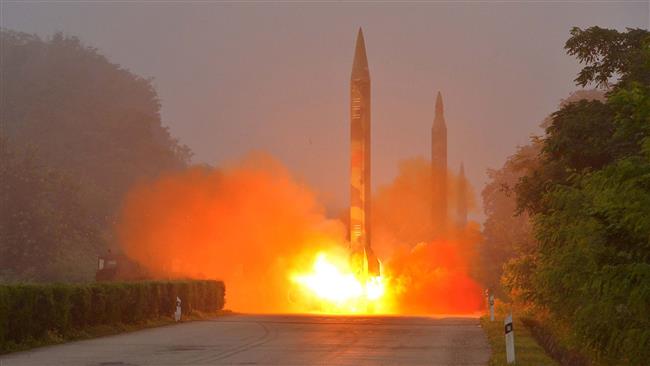 North Korea has launched a ballistic missile toward the Sea of Japan, which reportedly landed in or near Japanese-controlled waters for the first time.

According to a statement released by the South Korea’s Office of the Joint Chiefs of Staff, the missile was launched from a region in the North Korea’s South Hwanghae Province at around 7:50 a.m. local time on Wednesday (2250 GMT Tuesday).

This is the fourth such missile launch in the past two weeks by Pyongyang in open defiance of the United Nations Security Council resolutions.

The projectile, appearing to be a Rodong-type medium-range missile, flew some 1,000 kilometers (621 miles) toward the waters off the North Korea’s east coast, the statement further said.

The launch showed Pyongyang’s ambition to “directly and broadly attack neighboring countries and target several places in the Republic of Korea such as ports and airfields,” it added.

According to Japan’s Defense Minister Gen Nakatani, the missile was estimated to have landed into Tokyo’s exclusive economic zone (EEZ), some 250 kilometers (155 miles) off its northern coast at 8:05 a.m. on Wednesday (2305 GMT Tuesday).

Japan was also quick to strongly denounce the move by its western neighbor.

“It’s a serious threat against our country’s security. This is an outrageous act that cannot be tolerated,” Japanese Prime Minister Shinzo Abe told reporters shortly after the launch.

“There was no early warning. From the perspective of the safety of aircraft and ships, it is an extremely problematic, dangerous act. We immediately launched a strong protest against North Korea and condemned (the launch) in the strongest language” through diplomatic channels, he said.

he United States also issued a stern warning over the test fire, saying Washington is prepared to defend itself and its allies.

“We remain prepared to work with our allies and partners around the world to respond to further DPRK provocations, as well as to defend ourselves and our allies from any attack or provocation,” said State Department spokeswoman Anna Richey-Allen shortly after the test.

North Korea tested three other ballistic missiles on July 19, believed to be two SCUD missiles and a Rodong medium-range missile, saying the launches were part of a drill simulating preemptive strikes against South Korean ports and airfields used by the US military.

On June 22, North Korea also launched two Musudan mid-range ballistic missiles which both traveled over the Sea of Japan, also known as the East Sea.

The UN has imposed a general ban on Pyongyang’s developing of the ballistic missile technology. It has adopted five rounds of crippling sanctions on the North since it first tested an atomic device in 2006.

Tensions have been flaring in the region since January, when North Korea said it had successfully detonated a hydrogen bomb, its fourth nuclear test, and vowed to build up its nuclear program as deterrence against potential aggression from the US and its regional allies.

A month later, Pyongyang launched a long-range rocket which it said placed an earth observation satellite into orbit. However, Washington and Seoul denounced it as a cover for an intercontinental ballistic missile test.

North Korea says it will not give up on its nuclear deterrence unless Washington ends its hostile policy toward Pyongyang and dissolves the US-led UN command in South Korea. There are around 3,000 US troops permanently stationed in South Korea.

The two Koreas technically remain in a state of war after the 1950-53 Korean War ended in an armistice, not a peace treaty.

Potentially further deteriorating the security situation of the region, the US is to deploy the sophisticated Terminal High Altitude Area Defense (THAAD) missile system in the South Korea, planned to be installed by the end of next year to defend the country against nuclear and missile threats from Pyongyang as Seoul and the Washington claim.

China and Russia have already expressed their deep concern about THAAD, saying the system would threaten security, stability, and peace on the Korean Peninsula and do nothing to help denuclearize the volatile region.

Moscow and Beijing view the planned move as an attempt to put their military facilities within the range of US radars.

The announcement of the system deployment has also angered North Korea, which has threatened to take “physical action” in response to the decision.

The decision has also sparked numerous protesting rallies in South Korea in the past few weeks.