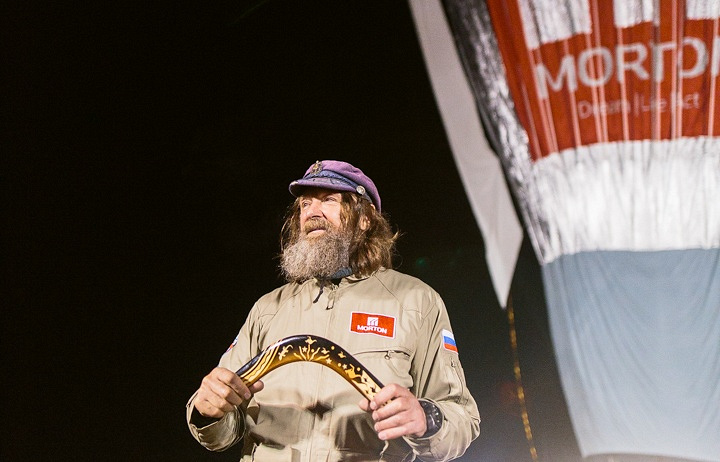 The famed Russian traveler, Fyodor Konyukhov, has returned to Moscow from Australia on Monday after his daring eleven-day round-the-world solo balloon flight.

“It was very difficult at first, but later it became ever more difficult. It was practically impossible either to sleep, to eat or to have some rest there,” he said upon arrival at Moscow’s Domodedovo airport where he was welcomed by more than a hundred of friends, fans and journalists. Nevertheless, in his words, he found time to admire the beauties of the planet. “Sunsets, sunrises… I was taking pictures when I could,” he added.

The globetrotter said he had been dreaming about such balloon flight since 2002. “I wonder how I could drive such a huge balloon. I had no one to learn this from,” he said, adding that his internal sensation of the flight’s duration was much longer than it really was. “They were telling me from the flight control center I was to reach some area in a couple of hours but these couple of hours felt like months for me,” he said.

On July 23, Konyukhov’s balloon, Morton, reached the Northam meridian (116°39’58″E) from where he started in the wee hours of July 12, thus setting yet another record, the fastest round-the-globe balloon flight ever.

Until now, there have been only two round-the-globe balloon flights. The first was in 1999, when Bertrand Piccard of Switzerland and Brian Jones of the UK covered a distance of 40,000 kilometers starting from Switzerland and finishing in Egypt in 19 days, 21 hours and 55 minutes. The other one was in 2002, when Steve Fossett of the U.S. flew the same route as Konyukhov in 13 days, 8 hours and 33 minutes. The Russian traveler made it in 11 days, five hours and 31 minutes (the exact flight time will be announced by specialists later).

Moreover, Konyukov has become the first ever balloonist to make a round-the-globe flight on the first try.

Konyukhov’s Morton balloon took off from Northam, Western Australia, at 07:30 local time (02:30 Moscow time) on July 12. The air vessel crossed non-stop Australia, the Pacific Ocean, South America, the Atlantic Ocean, flew past Cape of Good Hope and the Indian Ocean to finish in Australia. The flight’s leg over the Indian Ocean was the most difficult. Having passed Africa’s southern extremity, Konyukhov got caught in a strong wind current that was driving the balloon southeast, to Antarctica. To change the direction of flight, Konyukhov had to ascend to an unprecedented altitude of more than 10,600 meters to reach an air current flowing in the northeasterly direction, or from Antarctica to Australia.