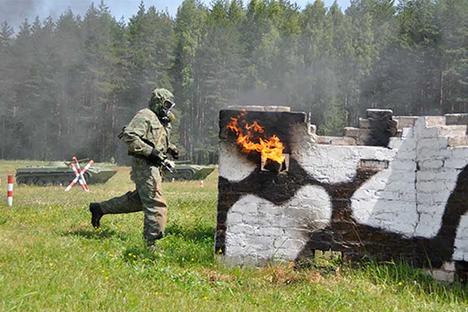 Chemical protection crews from Russia have won individual races at the “Safe Environment” international competition, the press service of the Russian Defense Ministry said on August 1.

Chinese crews got the second place, and Kazakhstan came in third. Competition was held on the Pesochnoye training range, on the border between Kostroma and Yaroslavl Regions. “Chemical protection crews from four countries – Russia, China, Kazakhstan and Egypt – have competed in extreme driving of armored vehicles at maximum speed over the last two days. Trails of the training range are equipped with ditches, trenches, large tunnels, hills, winding passages, water barriers and a flame assault strip,” the press service said.

There are two more stages of completion left – relay race and fire training. A new stage has been added to the competition this year – shooting from regular weapons and weapons of BTR-80 (amphibious armored personnel carrier) as means of individual defense.

Winners of the “Safe Environment” competition will be determined on August 13.