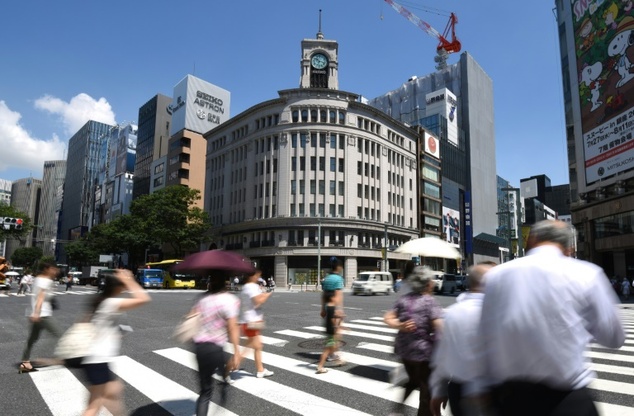 Crude prices rebounded modestly in Asian trade, but were still hovering around three-month lows of around $40 a barrel a day after slipping into a bear market, taking the wind out of energy and commodity-linked shares.

At the lunch break, Tokyo’s benchmark Nikkei 225 index was down 0.7 percent, while Sydney edged 0.4 percent lower and Seoul fell 0.5 percent.

Shanghai ticked up 0.2 percent after opening in the red, but Taipei, Manila and Singapore were lower.

Oil’s decline “will probably weigh on sentiment a little bit and we may see some risk-off moves associated with that”, James Woods, a strategist at Rivkin Securities in Sydney, told Bloomberg News.

“We’ll have an update from Shinzo Abe in Japan today, just running through the measures of the 28 trillion yen stimulus package. It’s really what’s going to dictate risk sentiment.”

US benchmark West Texas Intermediate was up seven cents to $40.13 a barrel while North Sea Brent rose 16 cents to $42.30.

Tokyo offered few details about its plan — particularly the amount of fresh spending — when it was unveiled last week, before the Bank of Japan disappointed markets with minor tweaks to its own measures on Friday.

The central bank did not expand a massive bond-buying programme — a cornerstone of its years-long battle against deflation — despite hopes for a one-two punch to boost the sluggish economy.

Only about one-quarter of the package will be fresh spending with loans and other financing spread over several years making up the rest, Bloomberg said, citing a personal familiar with the matter.

“The fiscal spending will probably include public works spending, so we can expect something of an economic boost,” said Masaki Kuwahara, an economist at Nomura Securities in Tokyo.

Japan’s economy is suffering from sluggish growth as a recent spike in the yen threatens corporate profits.

In forex markets Tuesday, the dollar edged higher against the yen to 102.60 yen in early trade, while it also rose against the oil-linked Malaysian ringgit and emerging market units, including the South Korean won, Indonesia’s rupiah and the Philippine peso.