Home » Manchet 3 » Syria: Six more breaches by terrorists observed during the past 24 hours 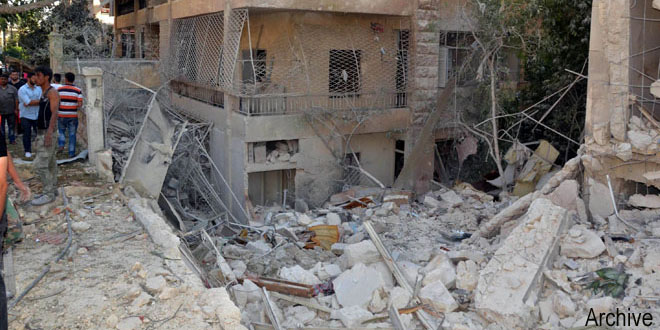 Syria: Six more breaches by terrorists observed during the past 24 hours

The cessation of hostilities agreement was breached six times by terrorist groups in the past 24 hours, raising the total number of breaches to 906 since the agreement came into effect on 27 February, the Russian center monitoring the agreement said today.

The Russian center, based in Hmeimim airbase in Lattakia, added in a statement that the so called “Jaish al-Islam” terrorists targeted several towns in Damascus countryside with mortar shells, while the terrorists of the so-called Free Army shelled Touma town in Lattakia countryside.

The center pointed out that food cargos were sent to needy families in Hama province and school supplies were sent to the students in Lattakia countryside, affirming that a Russian plane dropped 6500 food packages to the locals of many areas controlled by terrorists in Aleppo city, as another Russian plane dropped more than 21 tons of food and humanitarian aid on the ISIS-besieged areas in Deir Ezzor city.

The terrorists of Jabhat al-Nusra and ISIS shelled during the past 24 hours Handarat town in Aleppo countryside and the neighborhoods of al-Khalidiyeh, al-Zahra, al-Lairamoun and Castello commercial center in Aleppo city, the center said, adding that several towns in Damascus countryside and the airport of Hama city were targeted with various shells launched by terrorist groups.

The cessation of hostilities agreement is not applicable to the ISIS, Jabhat al-Nusra and other groups designated as terrorist organizations by the UN Security Council.