Home » Manchet 1 » Waiting for ISIS to release their “Pulse” 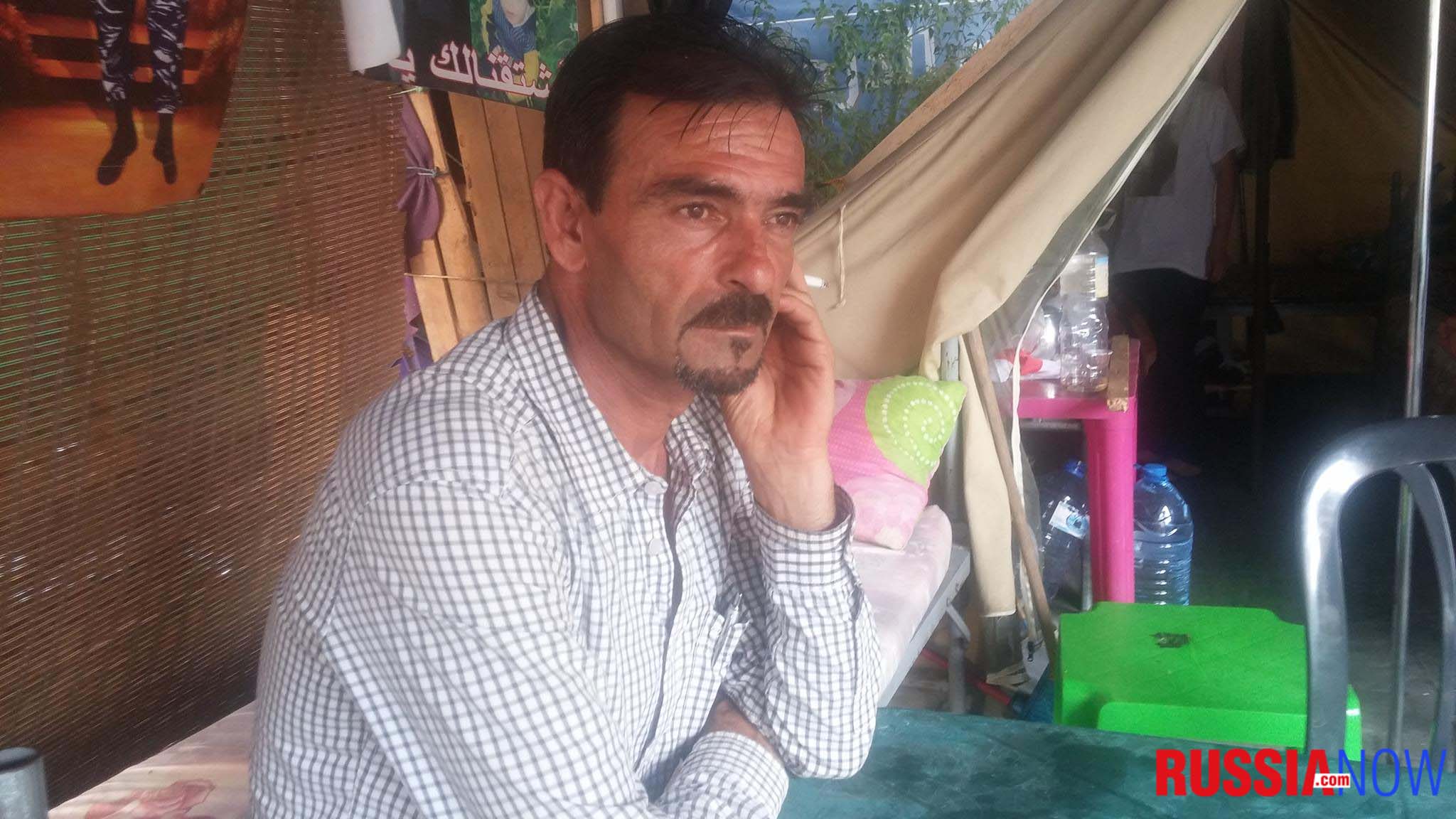 Waiting for ISIS to release their “Pulse”

Anyone passing through Riad Solh area in Beirut – Lebanon, will see a “sad tent”, which is now bored of waiting, just like the parents of the 9 Lebanese soldiers, who are still held captive by ISIS. Two years and 2 months have passed since the soldiers have been held hostages, and that same amount of time is equal to the age on one of the soldiers’s sons held captives.

“Russia-Now” met the hostage Mohamad Yusuf’s father, Hussein Yusuf, who has been fighting in every way possible to see his son again. We also met Mohammad’s wife, who told us all about the “endless hope” she still holds unto, despite having no clue if her husband was still alive anyway.

While the Lebanese Army Day, which happened to be yesterday the 1st of August, was not celebrated in a huge festival as the case is usually, we asked Hussein Yusuf if there are any news about his son and the other soldiers, whom are still being held captives by the terrorist organization “ISIS”.

Lebanese State forgot our cause

Yusuf told us tearfully, “There is no holiday without my son”, adding “How could I celebrate and my heart is broken because I know nothing about my son?” He insisted that “There will be no holiday for me, nor for the Lebanese people or for the army, until the captives return to the place where they should be; with their parents”.

The hopeful father told us that “Two years after the tragedy of the kidnapping of the military, and despite the pain, fatigue, and suffering, and the role that we we (soldiers’ families) have played, and still are playing until the moment, but through our capabilities as parents, we could not do any breach, or get any information regarding the fate of our
children”.

He added that “Unfortunately, every meeting with any official in the Lebanese state, whether if was with the Director-General of the General Security Maj. Gen. Abbas Ibrahim, or Prime Minister Tamman Salam, holds the answer:” We know nothing.” Yusuf added that “It’s either that the terrorist groups do not want to negotiate, or they do not want to find the solution
to this issue”.
“Based on these data, and these words, we returned to the streets to protest, and to commemorate the abduction of the soldiers”, he said, pointing out to the protests that the soldiers’ families organized yesterday in Riad al-Solh square. The main reason for protesting, he says, is to say that this file (kidnapped soldiers) is the number one file in Lebanon. According to Yusuf, who has no clue how his son is doing today, the Lebanese state should discuss the possible ways for the return of the kidnapped soldiers’ file every day, and every hour, until it finds a solution.
Answering our question of what demands from the Lebanese State today, Yusuf said: “The Lebanese state is not allowed to say “We know nothing” after today, and it should find the party, country, or means, which can be the key to armed groups in order to return the Lebanese soldiers’ file, especially that “they have sacrificed their lives for the sake of the Lebanese people and for the sake of Lebanon”.

He said that “There is no such thing as a crisis committee (which was formed by the Cabinet and appointed to some ministers), knowing that it held meetings in the beginning of the crisis only,” adding “It is a “committee crisis ” and not a “crisis committee”. He also informed us that until now, many families of soldiers do not know what a “crisis committee means”, adding that since the beginning of the issue, and after appointing the crisis committee, the soldiers’ families demanded that one of them becomes a member of the committee, in order to follow up on the matters, at
least for transparency in dealing with this topic.
He sadly says: “Unfortunately, we heard no response, neither from  state politicians or from ministers; Perhaps, they do not accept that a normal citizen follows up on such a huge issue, at the time when must bear
responsibility as a Lebanese state”.
Yusuf said that “the politicians were thinking about their personal interests, instead of their responsibilities”, adding “If the Lebanese state isn’t going to deal with this issue responsible, then Down with this state, and let the politicians go back to their regular lives, and return to being normal citizens, if they cannot solve the most basic concerns of
the citizen”.

Mohammad’s father, who has left his job and devoted all his time 2 years and 2 months ago for this “cause”, has not seen his son at all since he was kidnapped, but his son’s wife and his mother have seen him, with three other families who visited their captivated sons. He tells us that the last visit was 1 year and 9 months ago, when some obstacles prevented him from seeing his son. “After mothers’ first meeting with their children, there has not been any contact”, he says.  “All communication means were cut off, even though we have tried several times to know any hint about our children”.

Yusuf talks about sacrificing his life just to see his son: “We entered into Arsal outskirts several times, and we reached the Syrian territories. We even entered into the heart of the battle, and talked with a large number of armed men, and the goal was to get any information that could comfort the hearts of the mothers of the nine  kidnapped soldiers”.
“Pain not only hurts the person is pain, and it is imposed on us,” Hussein says, “but God is helping us, in addition to our attachment to our children. We want to stay strong for the sake of our children. They are our
pulse”.
He confirms that the soldiers’ families are able to communicate and meet with Prime Minister Salam and with Abbas Ibrahim, but the problem is that “the Lebanese state does not give us anything that cools our hearts”. Yusuf also tells “Russia-Now” “We contacted ISIS thought social media, and through intermediaries. We also entered into Arsal outskirts, through
mediation, and tried to see our children by talking to several people”, adding ” we even tried to be a link between the Lebanese government and the kidnappers, but the armed forces were hesitant, and many things that prevent this from happening took place”.

Not everyone wants a solution

The Lebanese State knows that we meet the militants, he says, adding that “Some Lebanese officials want a solution, and others impede the solution, while other officials want to find a solution”. “Unfortunately, we are in a country that is divided on itself and that belongs to foreign countries. This is our loss, in all files, and not just
the military file”.
We asked him how much of the humanitarian side is left in this file, and he replied that “If the issue was dealt with on a humanitarian level, we would have found the solution,” adding “Unfortunately, Lebanese politicians dealt with this issue from a political aspect from the beginning”. Yusuf demands that the Lebanese state retrieve the soldiers, insisting that he will sacrifice all his life for his return. He says: “I have the tight to say that is it unacceptable that the Lebanese state is not able to
return our sons to us until today”.
Is there a particular country that could help?, we ask him. “There should be. We are just ordinary citizens, and the Lebanese state has its high- level relations, so it should find the solution”.

My Son was released… but I won’t leave the tent
Sitting in the tent as well, was Hussein Jaber, whose kidnapped son has been released, but he always visits the families of other soldiers in the tent.
“We were joyful when our children were released and returned to us, but our joy stays incomplete if the nine abductees do not return to their parents”.

Jaber confirmed what Yusuf said about the lack of clarity for the families from the Lebanese state. “Their Parents do not know if they are alive or not,” he said.

Lebanese State wants proof.. Are they alive?
Ghinwa Moussa, whose husband, Mohammad Yousuf has been Kidnapped by ISIS speaks angrily saying “We do not know anything. We have no proof that they are alive”. Who is contacting you and providing you with information about your
husband? we ask her? “The Lebanese state, but they do not now anything now. ISIS is not giving our country any evidence that the kidnapped soldiers are alive, and the Lebanese state will not negotiate with “ISIS” without any
evidence”.
She told us that the abductees’ families have not been appearing on the media, because they thought that the Lebanese state is working on their childrens’ cause. They did not want to impede any advancement in the issue by appearing on the media.
She also told us about the “Crisis committee” that hasn’t met since the release of the Lebanese soldiers kidnapped by”Al Nusra Front,” adding: “They forgot the file of the nine soldiers.”

The latest meeting with a Lebanese official, she tells us was with the Major General Abbas Ibrahim, on  on Saturday, the 30th of August 2016, but “There is nothing new in the file, he told us.”

Crisis Committee … Absent
The “crisis committee”, has not contacted the soldiers’ families since eight months, and there is no one to refer to in case the committee was not doing its job, she says. “The minister of Health, Wael Abou Faour, who has established the committee, along with the Prime Minister Tammam Salam, knows that the crisis committee is not meeting, no longer meets. He told us so, but we want to know why. No one is providing us with any answer”.
How do you face this situation, and try to find out anything about your sons, husbands, and fathers? we ask her. “We tried to contact renowned people and religious leaders in Arsal, perhaps they  know anything about the soldiers. However, this does not help. Everyone tells us a different story. The Lebanese officials also, say that they do not know anything about our loved ones, or they do not want to know anything on purpose”.
But what does she demand?… Moussa answers: “The solution is for the Lebanese state to send negotiators to the “Islamic state”, and to pressure them as much as it can so that my husband and other soldiers return”. “Let the Lebanese state return the soldiers, two years is a long time. Don’t they find 24 months are long enough? ”
At the end of the interview, the strong lady insists: “I want my husband to come back to me and our family”, adding “his 2 years and 2 months year old son has not met him yet”.

The cause of the nine Lebanese soldiers held captive by the terrorist group “ISIS” has not ended yet, due to political agendas. While the soldiers’ families wait for their return, they are trying so hard to get any clue of whether they are alive or not. The humanitarian aspect of the cause is barely seen, amid politics dominating in every issue in Lebanon. How will this cause be solved?… How could the kidnapped soldiers return?… Let’s wait and see what the upcoming days, and even months will hold.