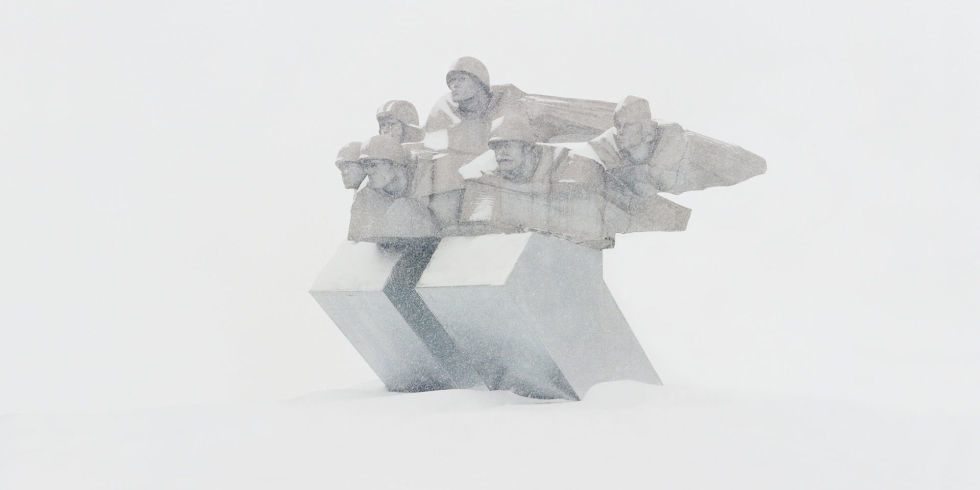 From 2013 to 2015, Russian photographer Danila Tkachenko traveled thousands of miles to some of the most remote regions of the country to photograph once-proud structures of the Soviet Union that have fallen into ruin. The collection, titled Restricted Areas, focuses on society’s desire to create utopia through advances in science and technology. The photos serve as a reminder of what can happen when a nation reaches too far.

Memorial on a deserted nuclear station.

Airplane–amphibia with vertical take-off VVA14. The USSR built only two of them in 1976, one of which has crashed during transportation.

Tropospheric antenna in the north of Russia–the type of connection which has become obsolete. There were many of them built in far North, all of them deserted at the moment.

Former mining town which has been closed and made a bombing trial field. The building on the photo shows the cultural center, one of the objects for bombing.

Pumpjacks on a spent oil field.

City where rocket engines were being produced in Soviet times. Was a closed city until 1992.

Former military base on the island, with an underground bunker.

Antenna built for interplanetary connection. The Soviet Union was planning to build bases on other planets, and prepared facilities for connection which were never used and are deserted now.

Secret city Chelyabinsk-40, which was not marked on the maps until 1994. The first Soviet nuclear bomb was created there. In 1964 there was the first nuclear catastrophe, one of the largest in history and equal in scale to Chernobyl. It stayed secret thanks to the fact that wind was blowing east. It is still impossible to enter the city unless one has special permission or relatives living there.

Boiler house of a closed aerodrome.

Boiler house of a closed aerodrome.

Antenna for interception of signals.

Excavator on a closed quarry.