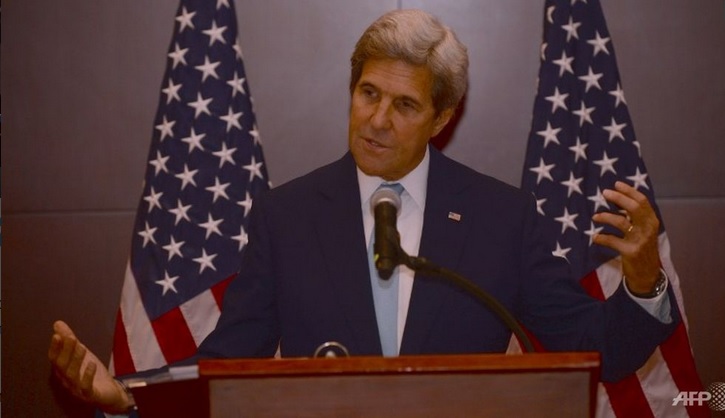 The United States warned North Korea Tuesday (Jul 26) that it faces “real consequences” over its internationally condemned nuclear and missile tests, which have inflamed tensions in East Asia.

“Together we are determined… to make absolutely certain that DPRK (North Korea) understands that there are real consequences for these actions,” US Secretary of State John Kerry told reporters on the sidelines of a meeting of Asian nations in Laos.

Tensions have soared since Pyongyang carried out its fourth nuclear test in January, followed by a series of missile launches. Analysts say these show it is making progress towards being able to strike the US mainland.

The festering issue has been a major theme of the talks in Vientiane, which are being attended by Southeast Asian nations as well as key regional players including China, the US, Russia, Japan and South Korea.

The annual gathering is one of the rare moments in the diplomatic calendar when all members of the stalled six-party talks aimed at ending North Korea’s nuclear programme are in the same room.

Kerry, who has held a flurry of closed-door meetings with his regional counterparts over the last two days, said efforts to denuclearise the Korean peninsula had dominated discussions.

“(The) issue that came up in nearly every meeting I had so far this week is the provocative and deeply concerning behaviour of the DPRK,” he told reporters.

“North Korea’s actions present a very serious threat, not just to this region but to international peace and security.”

Later Tuesday afternoon all six-party members – the US, China, Japan, Russia and North and South Korea – will attend the ASEAN Regional Forum, a security meeting that groups most of Asia.

UN sanctions against North Korea have been ratcheted up following the nuclear and missile testing.

But Pyongyang has continued to carry out missile launches – most recently last week – in a bid to prove that sanctions are ineffective in curbing its weapons development.

The continued sabre-rattling by the North prompted Washington and Seoul to agree earlier this month to deploy a sophisticated anti-missile system in South Korea, which can shoot down incoming enemy projectiles.

That has spooked both Beijing and Russia, who worry about having the US-made system on their doorstep.

Beijing is Pyongyang’s main diplomatic protector and economic benefactor but its patience has worn thin as the North refused to rein in its weapons programme.

Before Kerry’s visit a State Department official played down the likelihood of him meeting Ri.

But the official added: “I think that the North Korean foreign minister will again hear from not only the Secretary of State but from others in the room that the world is not prepared to accept North Korea as a nuclear state.”