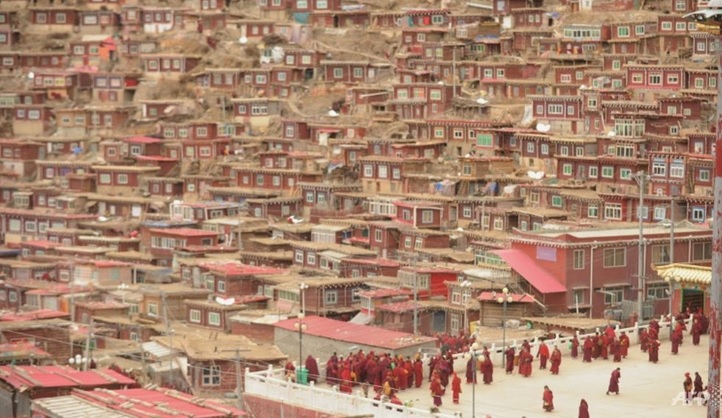 Rights groups on Tuesday (Jul 26) called for Chinese authorities to stop forced demolitions at one of the world’s biggest Tibetan Buddhist institutes, saying the move was an attempt to “severely restrict” religious freedoms.

Authorities began destroying living quarters at Larung Gar Institute in the southwestern province of Sichuan last week, according to a statement by the International Campaign for Tibet (ICT).

In June, local government officials ordered the estimated 10,000 Buddhist monks and nuns living at the centre, also known as Serthar, be cut to no more than 5,000, another overseas organisation, Free Tibet, said in an email.

“These demolitions are part of a set of policy measures implemented by the Chinese government that severely restrict the religious freedom of Tibetan Buddhists,” wrote the ICT’s president Matteo Mecacci.

“This is a regressive and dangerous approach aimed at managing and controlling Tibetan Buddhism that sends a chilling signal to the outside world about the pressures faced by people seeking to peacefully practice their religion in the PRC,” he added.

Serthar, known as Seda in Chinese, is in an ethnically Tibetan area more than 4,000 metres above sea level and hundreds of kilometres from the nearest city.

The institute was founded in 1980 in an uninhabited valley and has since grown to become one of the world’s most important centres of Tibetan Buddhism, with monks, nuns and students living in small wooden homes sprawling over the hillsides surrounding the complex.

Larung Gar’s founder Khenpo Jigme Phuntsok, who died in 2004, was known for keeping a strict focus on Buddhism rather than politics at the institute, maintaining close relationships with both Chinese authorities and the Dalai Lama, the exiled spiritual leader condemned as a separatist by Beijing.

China accuses the Nobel peace laureate of fomenting unrest in the region, but overseas rights groups say incidents are driven by unhappiness at Beijing’s rule among Tibetans.

A local propaganda official surnamed Ni told AFP that the work was intended to “prevent fires” by giving firefighters access to the crowded area and had “received the monks’ active cooperation”.

The plans call for the destruction of more than 100 buildings, he said, and will continue until September after which “monks and students without a residence can live in some empty buildings inside the planned district.”

The Buddhist academy’s survival was threatened in 2001 when armed police forced hundreds of nuns and monks to leave the site, destroying more than 1,000 homes to prevent them returning.

At the time police demanded that nuns sign documents denouncing the Dalai Lama and pledging not to return, according to overseas campaign groups, and Khenpo Jigme Phuntsok was detained for a year after the incident.

In early 2012, Serthar was rocked by violence when police fired tear gas and began shooting into a crowd of hundreds of peaceful Tibetan protesters, exile groups said.

China’s official Xinhua news agency said the incident, in which one person was killed, was triggered when “rioters” attacked police.