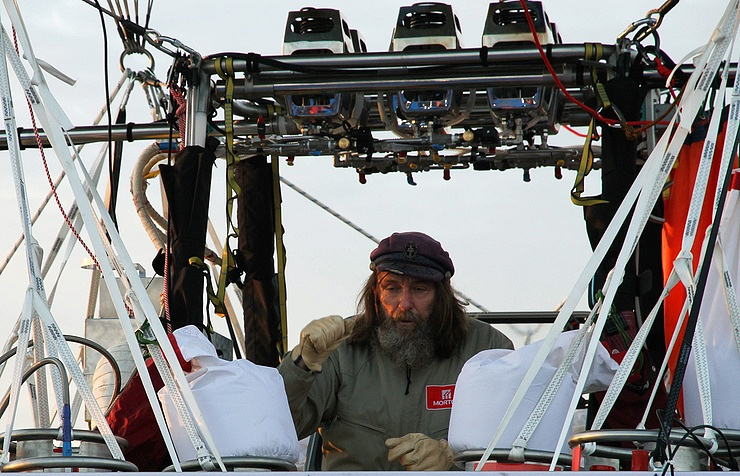 Russian traveler Fedor Konyukhov on the round-the-globe solo balloon voyage on Saturday (July 23) reached the meridian of west Australia’s Northam (116°39’58″E), from where he began the journey eleven days earlier.

Thus, Fedor Konyukhov has set a speed record of a round-the-globe balloon voyage.

Until now, there have been only two round-the-globe balloon flights. The first was in 1999, when Bertrand Piccard of Switzerland and Brian Jones of the UK covered a distance of 40,000 kilometers starting from Switzerland and finishing in Egypt in 19 days, 21 hours and 55 minutes. The other one was in 2002, when Steve Fossett of the U.S. flew the same route as Konyukhov in 13 days, 8 hours and 33 minutes. The Russian traveler’s result is close to 11 days, 5 hours and 31 minutes (specialists will give exact figures later on).

Right now, the pilot prepares for landing. He crosses the so-called “grain belt” – the agricultural area of several hundred kilometers, which crosses the country from the western shore. In that densely populated area live more than 3% of Australia’s population. It is dangerous to land there, thus the balloon continues floating towards the desert.

“For the landing, we are picking some deserted area far from electricity lines,” the traveler’s son Oskar told TASS on the phone. “He has crossed Northam – it is a wonder, which is difficult to believe.”

Konyukhov, an artist by profession, who was ordained as a Russian Orthodox priest in December 2010, has a great many spectacular exploits to his credit. The list includes two ascents to Mount Everest and ascents to the highest peaks of all other continents, a voyage across the Atlantic in a single-row boat for 46 days, the crossing of an 800-km distance in Greenland within 16 days, several solo circumnavigation tours, a single-handed non-stop tour around Antarctica, and a solo rowing voyage across the Pacific in 159 days.