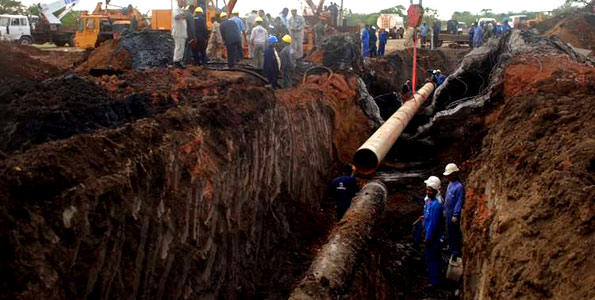 South Sudan and the Ugandan-Kenyan Divergence

Regional powers are brainstorming the most efficient way to contain the outburst of violence in South Sudan, but in the process, Uganda and Kenya have found themselves at loggerheads due to competing visions for what needs to be done. Kenya wants to implement an immediate arms embargo and expand the multilateral (UN and African Union) operation that’s already active on the ground with a strengthened mandate for substantially intervening in the conflict. This approach is favored by Riek Machar, the country’s Vice President and leader of the opposition. From the other side, though, Uganda is strictly opposed to any arms embargo, though it has announced that it would participate in any expanded multilateral mandate. This might just be a public relations ploy for the international community, though, since Kampala’s allied government in Juba has flat-out rejected the presence of any more multilateral forces on its territory. Kampala currently has forces on the ground evacuating its citizens from the conflict zone, and it even staged a unilateral intervention during the last outbreak of civil war in order to support the government. Correspondingly, Kampala’s position is favored by President Salva Kiir.

The sharp divergences between the Kenyan and Ugandan positions on South Sudan, especially as regards the highly contentious issue of an arms embargo, are due to their competing geostrategic interests in the country and are also part of the symptomatic outgrowth of the Kenyan-Tanzanian intra-East African Community (EAC) rivalry. To speak on the first point, Uganda actively supported South Sudan prior to its independence because it wanted to expand its sphere of influence into the country and counteract Khartoum’s assistance to the Lord’s Resistance Army. Uganda also wants access to the newly created country’s markets and natural resources, and to this end it’s sent an army of traders to the capital of Juba and is working with French energy company Total to devise plans for a South Sudan-Ugandan pipeline. This latter point used to be in alignment with Kenya’s interests as well, since Nairobi envisioned that South Sudanese resources could transit through Uganda on their way to the newly Chinese-constructed port of Lamu as part of the LAPSSET project, correspondingly linking up with Kenyan-destined Ugandan oil exports as well.

Screwing Up The Script

The infrastructural plans undergirding this regional cooperative blueprint were dramatically changed, however, when Uganda announced in April in that it would seek to export its recently discovered oil supplies through Tanzania’s Tanga port instead, which incidentally is also Chinese-financed just like Lamu. This dramatically undercut the viability of the Ugandan-transiting portion of LAPSSET and has the potential for endangering the whole pipeline project in general. The Daily Nation media outlet from Kenya reported shortly after Uganda’s announcement that Total “owns oil blocks in Congo, Uganda and South Sudan, and would be interested in having all its resources together transported through the Port of Tanga.” This means that the LAPSSET corridor might lose its original pipeline backbone and become a purely commercial enterprise tied to the real-sector economy. While there’s nothing intrinsically negative about that in principle, Nairobi was banking on incorporating the energy component into this project in order to package it as a regional megaproject, but with those hopes now dashed, Kenya might now be getting scared about the viability of its Standard Gauge Railway (SGR) initiative, too.

This transnational project was supposed to run parallel to the planned Kenyan-Ugandan pipeline and function as a complementary addition to LAPSSET, but after Kampala, it was envisaged to go south to connect with Rwanda and possibly also west into the Democratic Republic of the Congo (DRC). Kigali sent mixed signals about its commitment to this idea, but would likely agree to it if the SGR ever reached its border with Uganda, with the same being true for the DRC. Still, Rwanda is being courted by Tanzania and its own Central Corridor project that aims to connect the landlocked country with the Chinese-built port of Bagamoyo, and it’s expected to naturally favor this much shorter and more direct route if it had to prioritize one over the other. As for the DRC, it will also achieve access to the Central Corridor through the Rwandan-bordering city of Goma, but it would ideally also prefer for the SGR to connect with its northeastern river port of Kisangani in order to facilitate a cross-continental intermodal corridor between the Indian and Atlantic Oceans.

As ambitious as both of these plans are, though, they’re ultimately all dependent on whether or not the SGR even gets to Uganda or not. With Uganda steadily tilting closer to Tanzania as evidenced by its rejection of the Lamu port proposal in favor of Tanga, there exists the slight possibility that it might be pressured to give up on the SGR in favor of the Central Corridor.

This officially isn’t the case because Uganda recently declared that it is finally ready to sign a loan with China by October for financing its portion of the project, but if the previous history of delays and recent turn away from Kenya in regards to the oil pipeline and South Sudan are any indication, then it can’t completely be discounted that Kampala might get cold feet and replace its current Kenyan partner with its newfound Tanzanian one. Dodoma would be ecstatic if it could extend the Central Corridor all the way up to Uganda and replace its Kenyan rival, but it should be warned that any perceived “anti-Kenyan” pivot by Uganda – which is exactly what rejecting or indefinitely delaying the SGR would amount to at this point when considering the recent context – could inadvertently shatter the unity of the EAC and obstruct the organization’s planned federalization. Tanzania was historically the least enthusiastic of the bloc’s now-six members (itself, Kenya, Uganda, Rwanda, Burundi, and South Sudan) about expanded integration between them, yet it’s ironically advancing this said idea through the Ugandan pipeline and Central Corridor, though still staying relatively distant from anything that’s overtly political such as the proposed East African Federation.

Uganda and Kenya have traditionally been in favor of federalization and see it as the logical continuation of the region’s integrational processes and similar global trends (the EU, the Eurasian Union, SAARC, and the ASEAN Economic Community, et al.), and Ugandan President Museveni has staked his legacy on having this happen during this lifetime.  Whether he’s aware of it or not, his country is the ‘kingmaker’ in whether this project is ever actualized, since it’s only Uganda that could foster everlasting stability between these two seemingly inevitable regional rivals by tying them together in a complex system of interdependence through their prospectively intersecting infrastructure projects through his country. The wisest thing that Msueveni could do is to try to maximize his country’s benefits from both of his larger, coastal neighbors and find a way to integrate Uganda into the Mombasa (SGR) and Bagamoyo (Central Corridor) trade nexuses. If he instead sided too closely with Tanzania’s strategic interests by delaying or cancelling the SGR, concurrent with Total’s possible decision to abandon its South Sudanese LAPSSET pipeline plan in favor of concentrating all of its regional exports through a single line to Tanga, then Kenya would unquestionably see this as a major threat to its strategic interests and come under the belief that Uganda and Tanzania were conspiring to undermine it in the EAC and the planned federation.

The consequences of this discussed realization could be that Kenya puts the brakes on further EAC integration and enters into a ‘Cold War’ with Tanzania, which Nairobi might by that point be convinced is trying to usurp it as the regional leader. Though serious questions exist about the form of federalization that the community’s members are working towards (not least of which is the issue of state sovereignty), the general trend appears to suggest that some sort of deeper multilateral integration between all of the EAC’s members is the most reasonable policy path for keeping the region competitive in the globalized world, so anything which substantially interferes with this development should objectively be seen as detrimental to every state involved. Even though it might superficially seem like China wins either way because of its predominant influence over Lamu, Mombasa, Tanga, and Bagamoyo ports, that’s not necessarily true, since Beijing’s One Belt One Road grand strategic vision is one of regional harmony between all of its partners, not distrust and suspicion like what might develop between Kenya and Tanzania in this scenario.

All states have their national interests, but sometimes the pursuit of them might unintentionally create problems with a country’s partners, as seems to be happening with Kenya and Uganda’s diverging positions on South Sudan and Kenya’s shock that Tanzania ‘stole’ the Ugandan pipeline from it. At this moment, the last thing that the EAC needs right now are more actions that contribute to the strategic divide between Kenya on one hand and Tanzania and Uganda on the other, but Total might very well take such a step if it decides to pull its South Sudanese oil fields out of LAPSSET and redirect them to Tanga. Whether this is done purely out of its own self-interest or suggested by the US, it’ll very likely result in an aggravation of the incipient strategic security dilemma between these two EAC sides, thus producing the reaction of distrust and suspicion that might eventually lead to the unravelling of the SGR’s international plans and Kenya’s possible stonewalling of closer regional integration, both of which would negatively impact on China’s multipolar global vision of interconnected New Silk Roads. No matter what form it conceivably takes, there’s a very real possibility that the US is weighing its options and deliberating over all of the opportunities that it has for indirectly inflaming the strategic divide in East Africa, thus opening up a new front in the New Cold War and continuing the campaign of asymmetrical aggression that it’s been waging against China’s African interests.