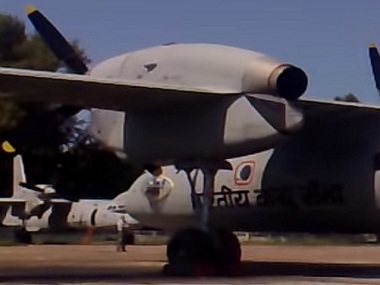 A transport plane of the Indian Air Force with 29 people on-board went missing on Friday (July 22), while flying from Chennai to Port Blair. The IAF, Navy and Coast Guard joined in to launch a massive search operation on the Bay of Bengal.

The Antonov AN-32 aircraft took off at 8.30 am from Tambaram in Chennai, and the last contact made was 16 minutes later, according to defence sources.

The AN-32 forms the backbone of the IAF’s medium lift capabilities, according to Bharat Rakshak, the consortium of Indian military websites.

The Indian Air Force website describes the aircraft as a “twin-engine turboprop, medium tactical transport aircraft of Russian origin with a crew of five and capacity to carry 39 paratroopers or max load of 6.7 tonnes”. The website notes that the aircraft has a maximum cruise speed of 530 km/hr.

The AN-32, also known as the ‘Sutlej’ in the IAF, is reportedly the workhorse of the transport fleet that travels to far off bases such as Leh, to deliver much-needed supplies to the Army outposts in the area. An estimated 100 aircraft are in service with the IAF.

Earlier this year, The Hindu reported that Reliance Defence entered a JV agreeing to build transport aircraft for military and civil use in India with the Ukraine-based Antonov. This, it adds, comes at a time when India is in the process of upgrading the AN-32 fleet.

According to the official website of Antonov, more than 240 of the AN-32 aircraft are being operated in countries, which have adverse climate conditions, including India, Sri Lanka, Columbia, Peru, Mexico, Afghanistan and African countries.

The News18 website, last year, reported that the IAF is overhauling its entire transport fleet with a vision of becoming more powerful in out-of-area operations besides supporting the Army’s logistical requirements.

But the problem in upgrading the fleet of the IAF, could be because of the Ukraine conflict.

A DefenseNews report dated 28 March, 2015, details that India will have to look for other options, perhaps direct purchase as well, to support the fleet as the Ukraine conflict has “stymied the upgrade” of the AN-32 aircraft.

The last batch of five of the AN-32 aircraft that were to be completed by March 2014, according to an Economic Timesreport, have been in limbo, said Defence Minister Manohar Parrikar. This far-reaching effect is due to the border conflict between Ukraine and Russia.

Parrikar said that the last batch that was sent to Ukraine, as part of a $400 million deal to modernise the fleet and extend its life, were stuck because of the conflict and that officials were working on getting the aircraft back, according to the ET report.

The upgrade of the AN-32 by Ukraine involves shipment of parts from Russia, according to the website RT.

It was also speculated that the planes sent for upgrade were missing in Ukraine. However, the IAF in a statement rubbished the report and called it “baseless”, according to a News18 report.

Instead, it attributed the delay in upgrade due to the non-availability of components thanks to the the ongoing geo-political stand-off. As per a 2009 contract with Ukraine’s state-owned Ukrspetsexport Corp, India was to send 40 aircraft for upgrade over four years, starting 2011, the website added.

The Telegraph writes that the IAF was the first purchaser of the Antonov-32 aircraft in 1976, a result of the strategy between then USSR (headed by Leonid Brezhnev) and India (headed by Indira Gandhi).

The AN-32 is then technically a Cold War product, which then eventually became the on-call aircraft for IAF that used it in search, disaster-relief and rescue operations, The Telegraph said.

As late as December 2015, the AN-32 aircraft was involved in recce missions during the Chennai floods. The aircraft was also used to distribute food supplies in Visakhapatnam after the Hudhud cyclone hit the city.