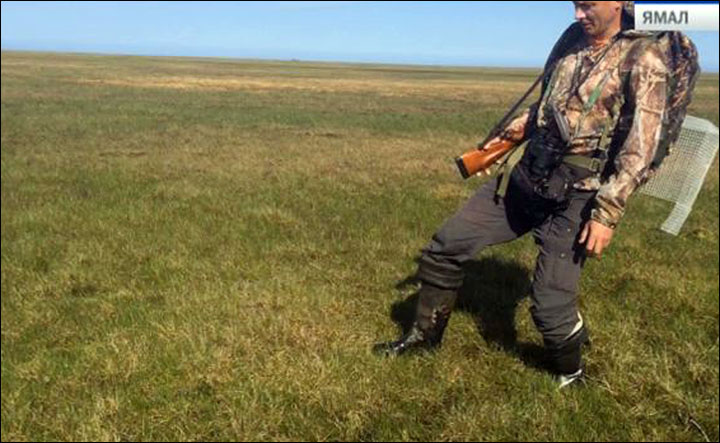 Siberian tundra wobbling like a waterbed from methane gas leak

Earth is moving as ‘leaking methane gas due to global warming causes surface to bubble’ in a new phenomenon.

This extraordinary sight – in a video filmed of the tundra on remote Belyy Island in the Kara Sea off the Yamal Peninsula coastline – was witnessed by a scientific research expedition. Researchers Alexander Sokolov and Dorothee Ehrich spotted 15 patches of trembling or bubbling grass-covered ground.

When punctured they emitted methane and carbon dioxide, according to measurements, although so far no details have been given. The reason is as yet unclear, but one possible explanation of the phenomenon is abnormal heat that caused permafrost to thaw, releasing gases.

Alexander Sokolov said that this summer is unusually hot on the Arctic island, a sign of which is polar bears moving from the frozen sea to the island.

Scientists have warned at the potential catastrophic impact of global warming leading to the release into the atmosphere of harmful gases hitherto frozen in the ground or under the sea. A possibility is that the trembling tundra on Bely Island is this process in action.

Further south, on the Yamal and Taimyr peninsulas, scientists are actively observing a number of craters that have suddenly formed in the permafrost.

When the craters first appeared on the Yamal Peninsula – known to locals as “the end of the world” – they sparked bizarre theories as to their formation.

They ranged from meteorites to stray missiles fired by Vladimir Putin’s military machine and from manmade pranks to the work of visiting aliens. Most experts now believe they were created by explosions of methane gas unlocked by warming temperatures in the far north of Russia.

On Yamal, the main theory is that the craters were formed by pingos – dome-shaped mounds over a core of ice – erupting under pressure of methane gas released by the thawing of permafrost caused by climate change.

The Yamal craters, some tiny but others large, were created by natural gas filling vacant space in ice humps, eventually triggering eruptions, according to leading authority Professor Vasily Bogoyavlensky, of Moscow’s Oil and Gas Research Institute.

Recently there were accounts of a ‘big bang’ leading to the formation of a crater on the Taimyr Peninsula.

The noise could be heard up to 100 kilometres away and one resident. They saw a ‘glow in the sky’ after the explosion.

The crater was first seen by reindeer herders who almost fell into it soon after the 2013 eruption.

Since the crater was formed in a 2013 blowout, its size rapidly increased at least 15 times during the next year and a half.

It is expected to be even wider now but no recent scientific surveys have been made to the remote site.

Our pictures show the so-called Deryabinsky crevice in snow soon after it was formed, when the hole was some four metres in width, and the latest known pictures which illustrate how it is now a lake, some 70 metres in diameter.

Alexander Sokolov is head of ecological R&D station of the Institute of Ecology of Plants and Animals of the Ural Department of the RAS in Labytnangi, Tyumen region.