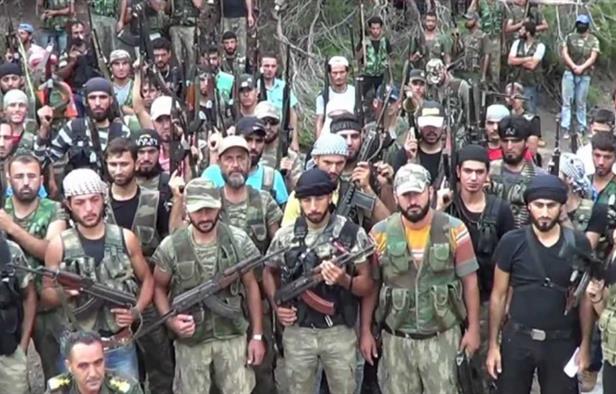 One of several U.S.-backed Syrian rebel groups has been caught on video taunting—and then beheading—a boy as young as 10 years old.

They claim the youth was a captured Palestinian fighting on behalf of pro-government forces—but his extremely young age, and the fact the group has received training and aid in financing and weapons from the United States government, could incite profoundly negative consequences in a situation already fraught with controversy.

As the BBC describes the footage, emphasis added, which was reportedly filmed north of Aleppo in Handarat:

“One video shows five men posing with the frightened child, who could be as young as 10, in the back of a truck. One of the men grips him by the hair.

“The same man is later filmed apparently cutting the boy’s head off.”

No matter what politicians and government would have you believe, this atrocity serves sufficiently to once again note: ‘They’ don’t hate us for our freedoms.

For weeks, pro-Assad forces have struggled to recapture Handarat, home of the Ein El Tal refugee camp for displaced Palestinians—though the camp has also experienced onslaughts from various rebel groups.

As Business Insider reported in October, Syrian observer Hasan Mustafa explained that “no fewer than 42 vetted groups now receive TOWs from a Saudi supply originally provided by the US. These weapons are funneled into Syria through Military Operations Command (MOC) posts in Turkey and Jordan that are co-operated by Western and local intelligence agencies.

“The various groups are well-documented due to the nature of TOW provisions. Saudi Arabia can not deliver the US-supplied TOWs without prior CIA approval.”

As abhorrent as the beheading of a youth as young as 10 might be, it isn’t the first time the Nour al-Din al-Zinki Movement has been accused of gross human rights abuses.

Various rebel groups in Syria backed by the U.S. and its allies, specifically among them the Nour al-Din al-Zinki Movement, Amnesty International said, “have committed serious violations of international humanitarian law, including abductions, torture, and summary killings.”

A 10-year-old’s beheading does nothing if not lend credence to those allegations.

Enab Baladi quoted a statement posted to Facebook by Yasser Ibrahim Youssef from the political bureau of Nour al-Din al-Zinki, saying an independent judicial commission would be investigating the incident, and anyone found responsible would be referred to military justice.

Whatever the outcome of that investigation, the fact U.S.-supported rebels have been committing such atrocities with alarming frequency should be duly noted by Americans who continue to believe the War on Terror to be effective.

In fact, the War on Terror—as tragically, facilely evidenced in the beheading of a child—is summarily effective in only one area: generating more terrorism.

Footage of the youth’s beheading first surfaced online Tuesday (July 19) morning, and according to the BBC, social media users have since identified him as “Abdullah Issa,” whom the men in the first video say fought with Liwa al-Quds, or the Jerusalem Brigade—a pro-government militia of Palestinians.

Pro-opposition news site Enab Baladi claimed the boy had been captured by members of the Nour al-Din al-Zinki Movement—a rebel group whose leader once explained had been one of few to be vetted by the CIA to receive TOW guided anti-tank missiles. Nour al-Din al-Zinki, among many others, has been widely reported to receive current or past financial support from the U.S., U.K., France, Turkey, Qatar, and other Gulf states.