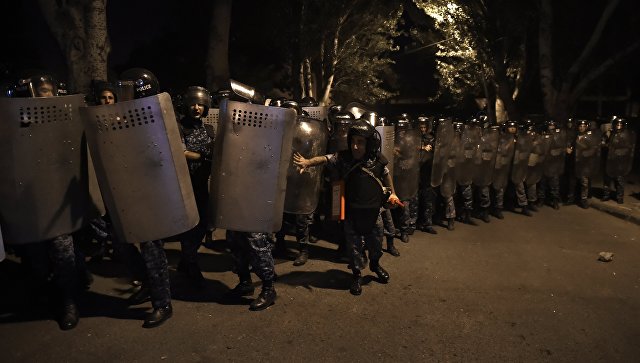 45 people hospitalized after clashes between protesters and police in Yerevan

As police and protesters clash in Khorenatsi Street in Yerevan late in the evening on July 20, 45 people apply for medical assistance. The clashes occurred near the police station that has been seized by an armed group of radical oppositionists for the fourth day already.

Anahit Aytayan, spokesperson for the Armenian health minister, said 25 police officers and almost as many civilians were injured in clashes. In her words, 18 people were taken to hospital, while others applied for medical assistance on their own.

Fifteen police officers and three civilians injured in clashes and/or poisoned with the tear gas applied by the police are currently at the Erebuni Hospital.  Two persons are in the intensive care unit, but their injuries are not life-threatening.

The situation has calmed down certainly but is still tense. Protesters use trash cans as barricades. The sides squabble and throw stones at each other, while some civilians are standing in a line between the police and protesters trying to prevent more clashes.

The hostage situation at the Erebuni district police station in Yerevan continues for the fourth day already. Valery Osipyan, Deputy Head of Yerevan City Police, and Deputy Head of Armenian Police Vardan Yeghiazaryan are still hostages. Colonel Artur Vanoyan was killed and four police officers were injured during a police operation to free the hostages.  Spokesman for the organization Varuzhan Avetisyan said it was a military coup. He announced they were urging change of power in Armenia and release of their leader Jirair Sefilyan who was detained under suspicion of arms trafficking.