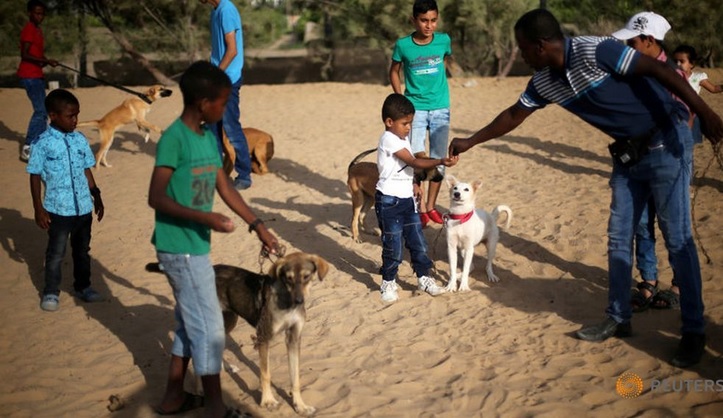 Among the many problems Gaza faces, from conflict to homelessness, power cuts and a lack of fresh water, Saeed el-Aer has dedicated himself to an unusual one: stray dogs.

Palestinian man Saeed el-Aer (L) cleans a stray dog on the property of the organisation he helped set up, the Sulala Society for Training and Caring for Animals, in Zahra, south of Gaza city July 17, 2016.

For several months, Aer has been trawling the streets of the territory looking for abandoned canines, winning their confidence, feeding them and restoring them to health.

“We tour the streets and distribute food for days or a week until they get used to us and then we catch and bring them to the society,” said Aer, referring to the organization he helped set up, the Sulala Society for Training and Caring for Animals.

It’s costly and time-consuming work. Aer, a government employee, estimates he has spent as much as US$20,000 on caring for 50 dogs so far, including vet bills and the rent on a fenced-in, 2,000 square-meter (0.5 acre) farm where they are housed.

At the farm in Zahra, south of Gaza city on the coast, young volunteers feed the dogs by boiling chicken wings and legs in a large pot over a wood-fired stove. When the animals are first brought in they are kept on chains. But as they become more domesticated, they are freer to roam and see visitors.

“They know me very well now,” said Aer, 45. “As soon as I arrive in my car, they pop up from all over the farm and come running to me.”

Dogs are considered unclean in Islam and are usually kept outside, but there is no ban on them. Caring for animals and pets is one of the tenets of the faith, and having a guard dog or one that helps with hunting is not uncommon.

Palestinian man Saeed el-Aer carries a stray dog into a car’s trunk, which he will transport to the organisation he helped set up, the Sulala Society for Training and Caring for Animals, in Zahra, south of Gaza city July 17, 2016.

In fact, Aer has been surprised by the number of Gazans who want to visit the kennels and care for the dogs. The society’s Facebook page has proved popular. Volunteers help train and walk the animals through the streets of Zahra.

“I love dogs,” said Nasser Abu Taqqeya, a 48-year-old father of six from central Gaza, who was planning to adopt a dog called Rex. “I will take him home so my kids will play with him and he will guard my house.”

With several thousand strays estimated to live in Gaza – a territory that’s barely 40 km (25 miles) long, 10 km wide and home to more than 1.9 million people – Aer knows he has his work cut out for some time to come.

But he’s hoping more people will decide to adopt a dog, as long as they are willing to sign up to the rules.

“You have to feed him, offer him water, not beat him,” he said. If people can’t stick to the rules, he said, “they call us and we will come and take him back.”