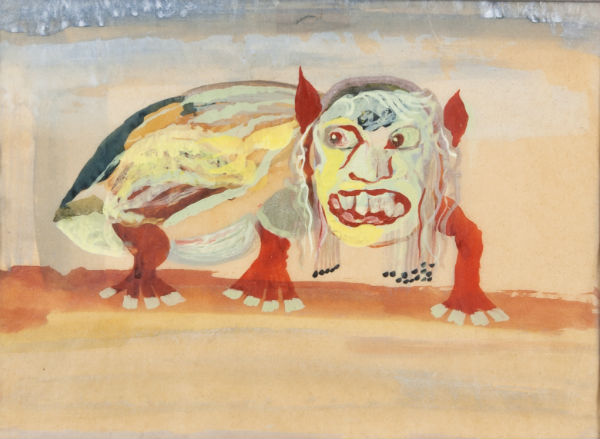 Most of the work was produced while he was in a mental institution.

The first major showing in Paris of the work of Russian artist Eugène Gabritschevsky (1893-1979) is on exhibition in La Maison Rouge, a private contemporary art foundation near the Bastille.

The mesmerizing show chronologically charts the journey of an artist whose promising scientific career was interrupted by severe mental illness, and saw him institutionalized for much of his life. In 1931 he was confined to the Haar-Eflingen psychiatric hospital near Munich where he more or less remained until his death in 1979. It was there that, over the course of three decades, Gabritschevsky created the bulk of his body of work, in silence and in solitude.

The exhibition presents art works from this prolific period and, for the first time, others produced before 1929. It brings together 250 works from thousands of drawings, together with archive documents including photographs and some of the artist’s correspondence.

The works on view are varied in style. Gabritschevsky employs a number of techniques, such as frottage (rubbing), grattage (scraping) and stamping, and makes use of a number of different materials. Some of the works reflect a dark and troubled mindscape furnished with more than enough fodder for nightmares.

Others explore ambiguous imaginary realms that could be chthonic or transcendent and work towards giving form and color to being itself: its mysterious origins, its uncharted future, its almost unbearable present.

Gazing at the works, one is overcome with a sort of twisted voyeuristic guilt; but rather than peeping through blinds, the viewer is peering into the artist’s mind.

Gabritschevsky’s interest in genetics is perceptible in the subjects of his work: fantastic beasts and hybrid creatures emerge from these mystic realms and, along with the incredible range of his artistic expression, gesture to the role of random mutation in our evolution.

Gabritschevsky’s mental struggle is tangible; he seems to work with the burden of unspeakable knowledge, prompting critic Annie Le Brun to write: “Quite simply, he went where no one else had ever been, to reach—even at the cost of the gravest imbalance—the point where life reveals the terrifying splendor of its infinite metamorphoses between the organic and the inorganic, the vegetable and the mineral, the human and the animal.”

See more works from the exhibition below: