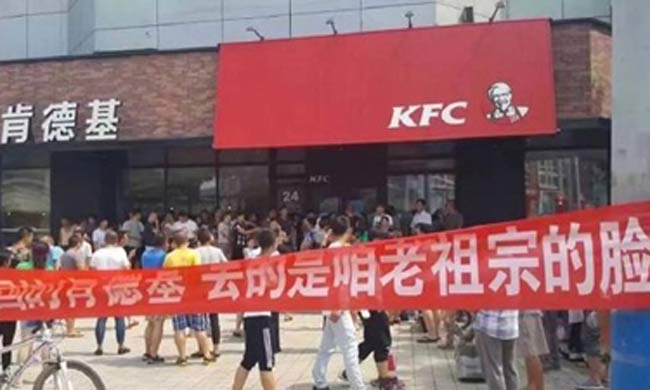 Protests against KFC, Apple iPhones slammed as irrational and disruptive

Amid high tensions over the South China Sea, several Chinese cities have witnessed protests against KFC restaurants and other foreign imports. Although protesters are voicing support for China’s sovereignty in the South China Sea, the demonstrations have nevertheless been widely criticized as irrational and disruptive, particularly by state media.

“Any action that promotes national development can rightfully be called patriotic. But so-called patriotism that willfully sacrifices public order will only bring damage to the nation and society,” People’s Daily expressed in a op-ed.

The article noted that patriotism implies the ability to think rationally, and that it calls for pragmatic actions and an inclusive mindset.

Chinese social media reacted quickly after The Hague arbitration tribunal ruled against China on July 15. After a widely circulated online post called on the public to boycott KFCand McDonalds on July 15 and 16, some Hebei province residents took it upon themselves to coordinate a formal protest.

According to photos allegedly taken on July 17 in the city of Laoting, several people rallied outside a KFC restaurant with banners reading “Boycott U.S., Japan and the Philippines!You are eating KFC from the U.S. and bringing shame on China!” Similar protests soon spread to Hunan, Shandong, Jiangsu and Anhui provinces. Meanwhile, videos cropped upof a protest in Gansu province, during which some citizens were seen holding banners that protested The Hague decision.

Some social media posts also called for Chinese citizens to stop purchasing mangoes from the Philippines and using American iPhones. A Hangzhou-based company even issued a notice forbidding its employees to buy the new iPhone7, which is expected to be unveiled soon. The notice encouraged employees to instead buy Chinese smartphones, even going too far as to advertise purchase subsidies, thepaper.cn reported.

The Ministry of Commerce denied the existence of a boycott against Philippines-made products on July 19, saying that no such movement is occurring.

Xinhua News Agency argued that to link the word “patriotism” with recent events simply constitutes a misuse of the term. Patriotism, the news outlet said, should not consist ofillegal actions that disturb the social order.

“In the farce of the South China Sea arbitration, we take a tit-for-tat approach, but stillhold the moral high ground. We have passion and rationality in equal measure. The government and society voice the same staunch position, based on reason and evidence.Together, this provides a foundation on which China can build a new type of patriotism,”People’s Daily said.

Large-scale protests also broke out in China in late 2012 when tens of thousands of angry citizens took to the streets to protest the “nationalization” of the Diaoyu Islands in the EastChina Sea. Some protesters smashed Japanese cars and even injured Chinese drivers.