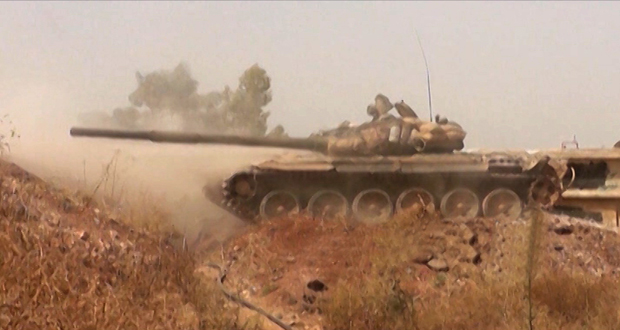 The army units, backed by the Syrian air force,on Tuesday (July 19) targeted more sites and positions of terrorist organizations, leaving a number of their members dead or injured, in addition to destroying their equipment and vehicles.

Moreover, an army unit ambushed ISIS terrorists through blowing up a series of explosive devices when their convoy of vehicles was passing on the Petroleum road in al-Mufagar town to the east of al-Salamyieh city where three vehicles were destroyed.

The ISIS gatherings and vehicles to the west of Panorama area were also targeted where a number of terrorists were killed.

An army unit destroyed a vehicle for Jabhat al-Nusra terrorists in Wadi al-Zaidi in the eastern countryside of the southern Daraa province. The terrorists who were on board the vehicle were killed, according to a military source.

More Jabhat al-Nusra terrorists were killed in an army operation that targeted their position in Jemrin village, 43 km east of Daraa city.