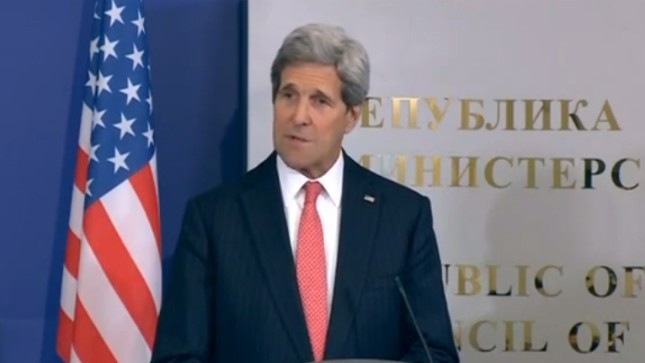 Turkey’s membership in NATO could be at risk as the government continues to round up those it believes were involved in a failed coup attempt, U.S. Secretary of State John Kerry warned Monday (July 18).

“NATO also has a requirement with respect to democracy, and NATO will indeed measure very carefully what is happening,” Kerry said during a news conference in Brussels. “And my hope is that Turkey is going to move in ways that do respect what they have said to me many times is the bedrock of their country.”

The Turkish government has detained more than 6,000 military personnel since a faction of the military attempted Friday night to wrest power from President Recep Tayyip Erdogan.

Kerry said the United States continues to stand by the democratically elected leadership of its NATO ally Turkey.

But he cautioned against a reaction to the coup that stifles democracy.

“We also firmly urge the government of Turkey to maintain calm and stability throughout the country,” Kerry said. “And we also urge the government of Turkey to uphold the highest standards of respect for the nation’s democratic institutions and the rule of law. And we will certainly support bringing the perpetrators of the coup to justice, but we also caution against a reach that goes well beyond that and stress the importance of the democratic rule being upheld.”

Kerry has spoken with Turkish Minister of Foreign Affairs Mevlut Cavusoglu three times since the coup attempt, Kerry said. During their conversations, Kerry added, Cavusoglu pledged Turkey will uphold democracy and the law.

But, Kerry acknowledged, the aftermath and arrests will need to be watched carefully.

“Obviously, a lot of people have been arrested and arrested very quickly,” Kerry said. “I think the level of vigilance and scrutiny is obviously going to be significant in the days ahead. And we’ll work very closely, and hopefully we can work in a constructive way that prevents a backsliding, and that is our hope.”

Kerry also said the United States has not received a formal request from Turkey to extradite Fethullah Gulen, a Muslim cleric living in Pennsylvania that Erdogan has blamed for the coup.

The United States will extradite him, Kerry said, if Turkey presents evidence of his involvement.

“I urged the foreign minister to make certain that in whatever portfolio and request they send us, they send us evidence, not allegations,” Kerry said. “We need to see genuine evidence that withstands the standard of scrutiny that exists in many countries’ system of law with respect to the issue of extradition. And if it meets that standard, there’s nothing – there’s no interest we have in standing in the way of appropriately honoring the treaty that we have with Turkey with respect to extradition.”

“I have spoken to President Recep Tayyip Erdogan, in the aftermath of the attempted coup in Turkey,” Stoltenberg said in a statement Monday. “I welcomed the strong support shown by the people and all political parties to democracy and to the democratically elected government. The Turkish people have shown great courage.”

Stoltenberg also expressed condolences for those killed, according to the statement. More than 260 people where killed during the coup attempt.

It’s important, Stoltenberg added, that Turkey uphold democracy and the rule of law.

“Being part of a unique community of values, it is essential for Turkey, like all other allies, to ensure full respect for democracy and its institutions, the constitutional order, the rule of law and fundamental freedoms,” he said. “Turkey is a valued NATO ally with whom I stand in solidarity in this difficult time.”