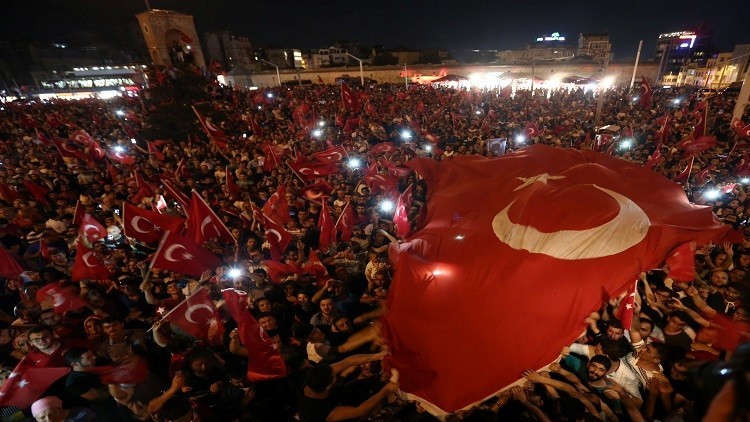 “We have decided on all necessary measures. We are in charge. No need for worry,” Turkish Deputy Prime Minister Mehmet Simsek posted on Twitter Sunday after the coup was announced a failure.

According to a Reuters report on Sunday, 6,000 people have been detained in Turkey in connection with the failed coup, with more detentions expected, broadcaster NTV said on Sunday, citing Justice Minister Bekir Bozdag. “The judicial process on this will continue,” NTV quoted Bozdag as saying.

Turkish authorities have also detained a senior air force general and a dozen other suspects accused of backing the failed coup, at a key air base used by US forces for raids in Syria, an official said Sunday.

The chief military assistant to Turkish President Recep Tayyip Erdogan, Ali Yazici, was also detained on Sunday in relation with the failed coup.

At least 290 people were killed and 1,400 were wounded, the Turkish foreign ministry said in a Sunday statement.

Of the dead, more than 100 were participants in the coup, the ministry said, adding that there was no doubt the coup had been staged by followers of US-based Muslim cleric Fethullah Gulen, Reuters reported on Sunday.

Gulen, who lives in self-imposed exile in the US, has denied involvement in the attempt to overthrow the government, condemning it as an affront to democracy.

“The US views with gravest concern events unfolding in Turkey,” Secretary of State John Kerry said on Friday.

Meanwhile, the attempted coup on Friday will not affect the US fight against the Islamic State and Turkey will reopen the Incirlik air base to US planes as coalition’s air operations resume, the Pentagon said on Sunday.

“China is paying close attention to the situation in Turkey,” Lu Kang added in a press release, the Xinhua News Agency reported.

“Turkey has a historic involvement with China’s Xinjiang Uyghur Autonomous Region. However, Turkey’s attitude toward the region can be controlled, because it’s mainly guided by Sino-Turkish relations,” Li Weijian, a professor of West Asian and African Studies at the Shanghai Institute for International Studies, told the Global Times on Sunday.

“Erdogan has established a double standard toward terrorism. On one hand, Turkey has been vowing to fight the Islamic State, but has also criticized China’s effort on anti-terrorism in Xinjiang and sympathizes with Uyghur terrorists,” Zhu Weilie, a Middle East expert at the Shanghai International Studies University, told the Global Times on Sunday.

Zhu added that strengthening anti-terrorism cooperation should be a significant part of Sino-Turkish relations.

“Turkey has improved its attitude toward China and its neighboring countries to seek more cooperation and friends,” Zan Tao, an expert on Turkey affairs and an associate professor at Peking University, told the Global Times.

According to Li, Turkey needs to remain stable and rectify its economy, where relations with China are crucial. Even if the coup attempt might bring some short-term uncertainty, it would not affect overall relations between the two countries.

During Erdogan’s visit to Beijing in August 2015, he said his government is firmly against any kind of activity inside Turkey that could harm China’s sovereignty and territorial integrity.

“Under Erdogan’s rule, Turkey has been enjoying economic development, which has won him wide public support,” Zan said.

“However, since Turkey must return to the global mainstream, Erdogan will adopt anti-terrorism policies in line with international norms, which would be good news for the Middle East,” Zhu said.

Analysts said that Erdogan’s attempt to amend the country’s constitution and the Islamization of the country may have affected military interests.

“Meanwhile, Turkey’s regional influence is declining, which also concerns some parties in the country,” Li said.