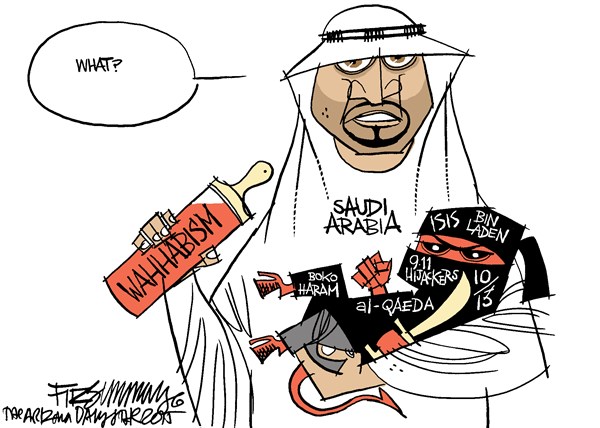 The new Saudi policies aimed at destroying Iran from within and rocking its stability by pushing the ethnic and religious minority to rebel have started to stir the concern of the Iranian leadership even if in a preliminary fashion. This was highlighted when the Iranian ministry of foreign affairs in Tehran summoned the man in charge of the Egyptian affairs and delivered its strong objection to the participation of Egyptian parliamentarians at the last conference of the Mojahedin-e-Khalq that was held in Paris last week…

In addition to the participation of Egyptian MPs for the first time ever in this conference, representatives from other Arab and Islamic governments also took part including the Palestinian Authority of Ramallah. In addition, the UAE offered its support and blessing to the event as expressed by Dr. Anwar Qarqash, the minister of state for foreign affairs, who raised Prince Turki al-Faisal who called for ousting the [Iranian] regime and was at the head of the participants. We believe that all these participations were mobilized and encouraged by the Saudis and they all support the analyses indicating that the Saudi leadership has started to move to the politics of direct confrontation with Iran and away from secret action into public work aimed at rocking Iran’s security and stability in addition to pushing the ethnic and religious minorities there to rebel…and supporting the Iranian opposition groups, mainly Mojahedin-e-Khalq.

Thus, we have to expect the reiteration of the scenario whereby which Saudi Arabia supported the armed opposition in Syria either partially or completely in Iran. Indeed, the noteworthy Saudi attendance of the Iranian opposition’s conference in Paris aimed at delivering a very powerful message to Iran… Quite concisely, the Saudi leadership is moving to a new phase, one that is characterized by viciousness and a dash towards war with Iran. It is thus smashing all its former, fifty year-long political heritage: that of sitting in the back seats and fighting by-proxy wars or wars via the local and regional tools under different covers. Some of these covers were Islamic and others had to do with democracy and Human Rights such as the case of Syria, or with maintaining the legitimate rule such as the case of Yemen.

In paradox, these new Saudi policies are being repeated and they resemble the policies that Saudi Arabia has always opposed and accused of being reckless. We are hereby referring to non-royal or “revolutionary” countries such as Iraq, Libya, Syria, Algeria and the Iranian regime itself, which consolidated itself following the revolution of Imam Khomeini and the toppling of the Shah.

We are not aware of who is overseeing the establishment of these new, surprising Saudi policies… However, one can say that these politics match the methods of Iraqi leader, Saddam Hussein, and Libyan leader, Muammar Gaddafi, whom the Saudi ruling authority has always accused of recklessness and worked, one way or another, towards destroying them either directly or indirectly. The former ended up being hanged on an American platform and under a Saudi order knowing that America is KSA’s first ally; while the latter was dragged in the streets of Sirte following the intervention of the same American ally and also with Saudi support.

Saddam fought Iran with Saudi support. He invaded Kuwait following an American green light. Col. Gaddafi carried out a military intervention in Chad. He supported Col. John Garang in Sudan, the Irish republic army, some Arab armed groups in Africa and Asia (Muslim rebels in the Philippines) and Latin America.

This is a surprising Saudi transformation that started by supporting the Syrian opposition to topple the Al-Assad regime five years ago and that proceeded with Al-Hazm Storm in Yemen. There are currently some powerful signs indicating that the instance of the support of the military conflict in Syria could move to Iran. This transformation breaks all the previous Saudi taboos and constitutes a transfer from the politics of the by-proxy wars and leading from the back seats into the politics of sitting behind the steering wheel and mobilizing the others in the back seat. Will this new transformation achieve its objectives? Only the future can tell…