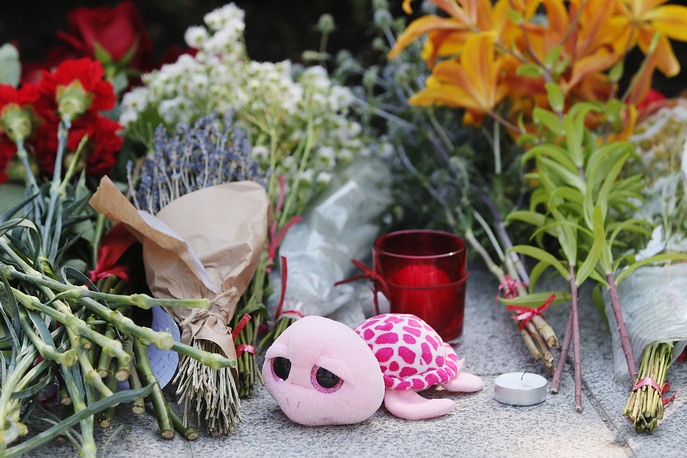 Russians have been laying flowers at the entrances to the French Embassy in Moscow and France’s Consulate-General in St. Petersburg to pay their respects to the victims of Thursday’s act of terror in Nice that killed more than 80 people, including one Russian citizen, TASS correspondents report from the scene.

People who brought flowers say that this is a global tragedy and point to terror threats looming not only over France but over other countries as well.

“I decided to take part in such an event for the first time today,” Moscow resident Andrei told TASS. “Although I am in no way linked to France, I believe this tragedy is a mutual one. Not only did it affect French people, Russians were among the victims too, which means that this is our shared tragedy.”

Some who came to the embassy building say there is a common foe, namely, terrorism. “Some Westerners call us enemies, but do enemies bring flowers?” one of them said. “We have a shared adversary, and we were able to see this once again.”

The French Embassy in Russia is going to open a book of condolences in the wake of the tragedy. The book is due to appear later on Friday, a source in the embassy has told TASS.

Meanwhile, France’s Consulate-General in St. Petersburg has already opened a book of condolences for the victims of the attack. “Leningrad Region Governor Alexander Drozdenko was one of the first to leave a message in it,” the diplomatic mission’s press attache, Polina Kitova told TASS.

Drozdenko described the tragedy in Nice as “a barbaric act of terrorism carried out cynically on France’s national holiday.” He emphasized that the terrorists’ deeds have aroused indignation in our hearts.” “We mourn with the families and friends of the victims,” the governor wrote.

There were thousands of people at the moment of the attack on Thursday evening on Nice’s Promenade des Anglais, who were leaving a festive firework display commemorating Bastille Day. A truck rammed into the crowd at full speed.

According to the latest reports, 84 people have been killed, while several dozen sustained injuries. The truck driver was shot dead by the police.