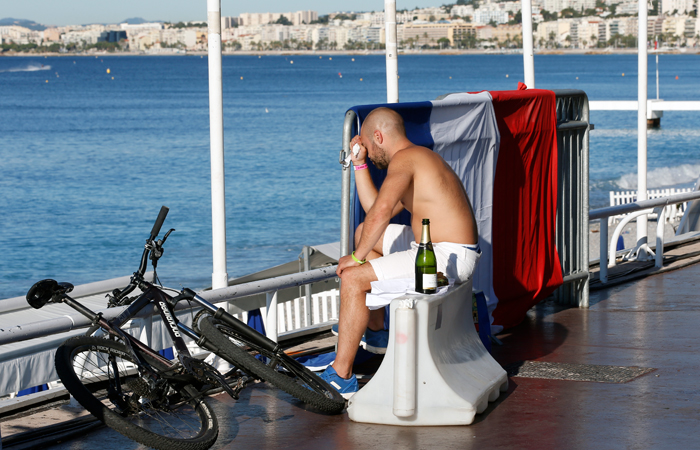 At least 84 people have been killed in the French city of Nice after an armed man drove a truck at full speed for 2km through a crowd who had gathered to watch the Bastille Day fireworks display over the seafront.

The attack on France’s national day came eight months after 130 people were killed in Paris in coordinated attacks on a stadium, bars and a rock concert at the Bataclan venue.

The French president, François Hollande, said the Nice killings on Thursday night appeared to be a terrorist attack.

As the authorities confirmed a rising death toll, with 18 of the hundreds injured said to be in a critical condition, the scene of the attack, the seafront Promenade des Anglais, was closed off by police on Friday morning and people were advised to stay at home.

Employees of hotels on the promenade were having difficulty getting to work and were being searched. Tourists were leaving for the airport, while those who had witnessed the attack were seen wrapped in blankets, shaking their heads and crying.

“There were bodies everywhere. Children, mothers. A guy from the building almost lost his kids. I still don’t understand,” said a janitor of one of the promenade buildings.

A couple who were watching the fireworks from their balcony on the promenade said: “There were families crossing the street with kids with bodies everywhere. I saw a mum covering her child’s eyes telling him to keep them tightly shut.”

Restaurant owners on the beachfront described sheltering panicked crowds. At the Mediterranean University Centre, where emergency psychological support is being given to those who were on the promenade, people were bundled up in blankets outside, some covered in blood or bandages.

Officials said hundreds were hurt as the driver wove along the seafront, knocking them down “like skittles”. Video footage showed the 19-tonne white truck speeding up as it drove into screaming crowds on the promenade while several people tried to chase it on foot. A local government official said weapons and grenades were found inside the unmarked articulated truck.

The attacker, identified by a police source as a 31-year-old Tunisian-born Frenchman, opened fire before police shot him dead. He was known to police for lower-level crimes, such as theft and violence, but had not been put on a watchlist by French intelligence services, Reuters said.

No groups have claimed responsibility for the attack, but Hollande said it was “terrorist in nature” and called up military and police reservists to relieve forces that have been involved in the state of emergency that began after the Islamic State attacks in Paris in November.

“Nothing will make us yield in our will to fight terrorism,” he said in a pre-dawn address. “We will further strengthen our actions in Iraq and in Syria. We will continue striking those who attack us on our own soil,” he said, referring to France’s current airstrikes on Isis.

A spokesman for the British prime minister, Theresa May, said she was being kept up to date on events, adding: “Our thoughts are with all those affected by this terrible incident on what was a day of national celebration.”

The White House said Barack Obama was being kept updated. The president condemned “what appears to be a horrific terrorist attack in Nice” and said he had directed his team to offer any assistance France may need in its investigation.

The Republican presidential candidate, Donald Trump, said on Twitter that, after the events in Nice, he was delaying a press conference planned for Friday to announce his running mate.

Hollande, who will hold emergency security talks at the Élysée on Friday morning before flying to Nice, must now address the horror and pain of a nation that has already been rocked by three major attacks in 18 months, and several smaller-scale killings.

A total of 147 people were killed in attacks in 2015 – from January’s gun attacks on the Charlie Hebdo offices and a kosher grocery store to the coordinated gun and bomb attacks on 13 November.

The fact that many children were among the dead and seriously injured in Nice has deepened France’s grief.