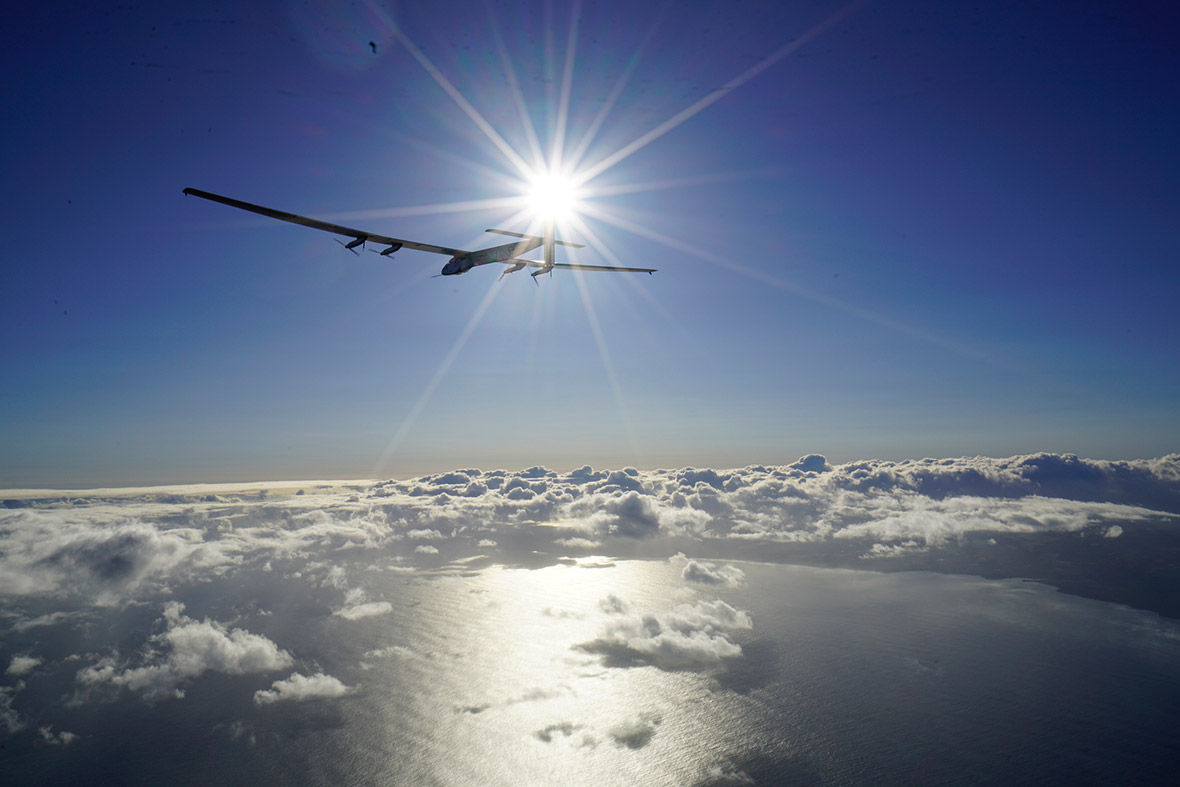 An aeroplane powered by energy from the sun has arrived in Egypt, the penultimate stop on the first fuel-free flight around the globe. Solar Impulse 2, a spindly single-seat plane, flew over the Giza Pyramids to make a smooth landing at Cairo airport, after leaving Seville in southern Spain 48 hours and 50 minutes earlier.

The journey started in early March 2015 when the plane took off from Abu Dhabi and headed for Muscat in Oman. Since then, the 35,000km (21,750 miles) trip has seen the plane travel across Asia before making history as the first solar plane to accomplish an oceanic crossing during the almost five-day trip from Nagoya in Japan to Hawaii in the summer of 2015. The trip re-started in Hawaii in April 2016 after a winter hiatus. The Solar Impulse team will now prepare for the final leg of the journey to United Arab Emirates.

13 July 2016: Solar Impulse 2 flies over the pyramids of Giza prior to landing in Cairo, Egypt

23 June 2016: Spanish Air Force jets trail the colours of the national flag as Solar Impulse 2 arrives at Seville airport after a 70-hour journey from New York powered only by sunlight

20 June 2016: Bertrand Piccard of Switzerland pilots the Solar Impulse 2 aircraft as it takes off from John F Kennedy International Airport in New York on the transatlantic leg of its record-breaking flight around the world

21 April 2016: The solar-powered plane piloted by Bertrand Piccard is seen in the air after successfully taking off from Kalaeloa Airport in O’ahu, Hawaii, en route to San Francisco

23 April 2016: Solar Impulse 2, piloted by Bertrand Piccard, flies over the Golden Gate bridge in San Francisco after a 62-hour flight from Hawaii

12 May 2016: Bertrand Piccard looks at a figurine of Captain Jean-Luc Picard prior to taking off from Goodyear Airport in Phoenix, Arizona, heading for Tulsa International Airport in Oklahoma

25 May 2016: Bertrand Piccard takes a selfie onboard Solar Impulse 2 during his flight from Dayton, Oklahoma to Lehigh Valley, Pennsylvania

11 June 2016: Solar Impulse 2 flies over the Statue of Liberty before landing at JFK airport in New York

21 April 2016: Michele Piccard sends a kiss to her husband as Solar Impulse2 takes off from Kalaeloa Airport in O’ahu, Hawaii, on a non-stop, three-day flight to San Francisco

29 June 2015: Yasemine Borschberg waves a Japanese flag as Solar Impulse 2, piloted by her husband, takes off from Nagoya Komaki airport in Japan en route to Hawaii after spending an unscheduled four-week stopover. The five-day flight to Hawaii is expected to be longest leg of the plane’s 35,000km round-the-world journey

31 May 2015: A Chinese security guard stands by shortly before the Swiss-made solar-powered plane Solar Impluse 2 takes off from Lukou International Airport in Nanjing, in China’s eastern Jiangsu province for a planned six-day flight over the Pacific Ocean, the most ambitious leg of its quest to circumnavigate the globe powered only by the sun

1 June 2015: The Nagano mountain area is photographed by Swiss pilot Andre Borschberg in the cockpit of Solar Impulse 2. The solar-powered plane cut short the seventh leg of its 35,000km journey, landing in Nagoya, western Japan, due to bad weather

18 March 2015: Two youths take a picture of themselves with Solar Impulse 2 as it takes off from Ahmedabad en route to the northern Indian city of Varanasi for a stop, before heading to Myanmar

9 March 2015: Swiss pilots Bertrand Piccard and Andre Borschberg smile before boarding Solar Impulse 2, at Al Bateen airport in Abu Dhabi, at the start of an attempt to fly around the world in the solar-powered plane

9 March 2015: Solar Impulse 2 flies over Sheikh Zayed mosque after taking off from al-Bateen airport in Abu Dhabi as it heads to Muscat

9 March 2015: Andre Boschberg poses for a photo with a local man after he landed Solar Impulse 2 in the Omani capital, Muscat

22 April 2015: Solar Impulse 2 is seen in a hangar at Lukou International Airport in Nanjing, Jiangsu province

The plane has been piloted in turns by Swiss aviators Andre Borschberg and Bertrand Piccard in a campaign to build support for clean energy technologies. Solar Impulse 2 flies without a drop of fuel, its four engines are powered solely by energy collected from more than 17,000 solar cells in its wings. Surplus power is stored in batteries during the day to keep the plane aloft on long-distance flights. The carbon fibre plane has a wingspan exceeding that of a Boeing 747, but is the weight of a family car. It can climb to about 8,500 metres (28,000 feet) and cruise at 55-100km per hour (34-62mph).