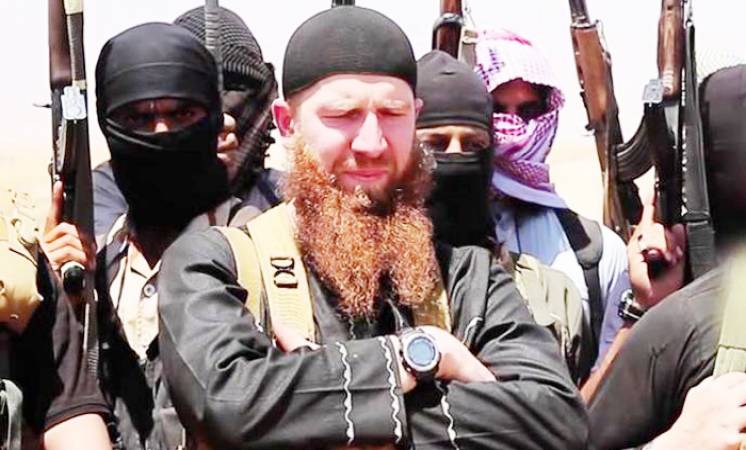 A top Islamic State (IS) group commander, Omar al-Shishani, has been killed in Iraq, the militant-linked Amaq agency said on Wednesday (Jul 13).

The Pentagon announced in March that Shishani was believed to have died of injuries received in an air strike targeting his convoy in northeastern Syria – details at odds with Amaq’s account.

Citing a “military source,” Amaq said Shishani was killed “in the town of Sharqat as he took part in repelling the military campaign on the city of Mosul,” referring to the last IS-held city in Iraq.

Iraqi forces are conducting operations to set the stage for a final push to Mosul, the country’s second city that fell to IS in June 2014.

Sharqat lies on the road north to Mosul, but Iraqi forces recently bypassed the area to recapture a key military base in the Qayyarah area farther north that the Pentagon said will be a “springboard” for the push toward the city.

Amaq did not specify when Shishani was killed, but the loss of the commander is a significant blow to the militant group, which has suffered a string of setbacks in Iraq this year.

Shishani, a fierce, battle-hardened warlord with roots in Georgia and a thick red beard who was one of the most notorious faces of IS.

Shishani, whose nom de guerre means “Omar the Chechen”, was one of the IS leaders most wanted by Washington which had put a multi-million-dollar bounty on his head.

IS overran large areas north and west of Baghdad in 2014, but has since lost significant ground to Iraqi forces backed by US-led air strikes, training and other assistance.

Baghdad declared victory in the city of Fallujah, west of Baghdad, at the end of last month, leaving Mosul as the sole Iraqi city held by IS.

The Sunni extremist group has responded to the battlefield setbacks by striking civilians, particularly Shiites, and experts have warned there may be more bombings as the militants continue to lose ground.

His exact rank was unclear, but the Pentagon regarded him as IS’s “minister of war” for the militant group.

Shishani came from the Pankisi Gorge region that is populated mainly by ethnic Chechens.

He resurfaced in northern Syria in 2012 as the leader of a battalion of foreign fighters, according to Aymenn al-Tamimi, research fellow at the Middle East Forum, a US think-tank.

As early as May 2013, when IS was just emerging in Syria, he was appointed the group’s military commander for the north of the country, Tamimi said.

Richard Barrett of the US-based Soufan Group described Shishani as IS’s “most senior military commander” who had been in charge of key battles.

He also had “the loyalty of Chechen fighters who are considered by ISIS as elite troops,” Barrett told AFP earlier this year.

Shishani was not however a member of IS’s political leadership, a structure that is even murkier than its military command.

A profile of Shishani written by an IS supporter and posted online described him as “one of the best strategic and tactical leaders”.

He was born in 1986 to a Christian father and a Muslim mother, according to the text, which claimed he “never lost any of his battles”.

In an indication of Shishani’s popularity among jihadist sympathisers, the text described him as “the new Khalid Ibn al-Walid” — a reference to a leader from the early days of Islam who played a crucial role in spreading the nascent religion in Syria and Iraq.

But some downplayed Shishani’s importance.

“He was a fierce fighter,” according to Rami Abdel Rahman, director of the Britain-based Syrian Observatory for Human Rights, which monitors the Syrian conflict.

“He would be sent to frontlines across IS-held territory,” he said.

But his death “won’t have an actual impact on the battlefield. There are many other leaders,” he told AFP back in March.

“IS chooses which faces to make known in the media — while it conceals the real leaders.”