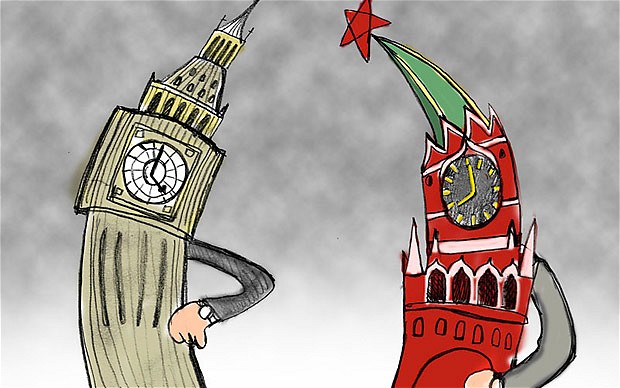 UK’s New PM vs. Russia: The Good, The Bad, The Ugly

What does Britain’s government reshuffle portend for UK-Russia relations?

With global anxiety over Russia at an all-time high, Theresa May’s ascendancy as UK Prime Minister is punctuated by a big question mark. Which way will she go in her country’s approach toward Moscow?

Many analysts believe that Western countries are pushing things toward the brink of outright war. Will May follow predecessor David Cameron’s confrontational style?

Or will she work toward tamping down the dangerous tensions?

In the past May’s actions vis-a-vis Russia have been a mixed bag. They’ve included:

– Taking a courageous stance against fabricated news that demonized Russia.

– Having her position compromised by her own bungling of that issue.

– Completely abandoning principle in the face of strong political pressure.

My principal familiarity with her actions comes from my research and concern regarding the 2006 Alexander Litvinenko polonium death case. In short, this was a

scandal solely based upon the fabricated accusation that Russian president Vladimir Putin was to blame. Outlaw Russian oligarch Boris Berezovsky was behind this

scheme. I document the speciousness of his story in my book The Phony Litvinenko Murder.

The UK government picked up on Berezovsky’s allegations and embarked upon a decade-long effort to prove that Berezovsky was right.

In my book  Litvinenko Murder Case Solved I document that this was a legally illegitimate quest from the get-go. It was conducted under the auspices of a rogue coroner named Sir Robert Owen.

During the course of the coronial proceedings I mounted an effort to put an end to Owen’s malicious witch hunt for Russian state culpability. I was joined in this work by colleagues from Great Britain, Russia, and the US.

The effort involved direct communication with the offices of the Lord Chancellor Chris Grayling and Home Secretary Theresa May and the publication of numerous articles in the press.

THE GOOD. May responded positively to a no-nonsense refutation of Berezovsky’s scheme.

My representations to the British government were twofold. First, the coroner was conducting a criminal investigation outside the purview of his job. (Indeed he was specifically forbidden by law from placing criminal liability.) Second, the coroner was ignoring his statutory duties to rule on the manner and cause of death.

Remarkably, nobody had ever actually ruled Litvinenko’s death was even a homicide. Yet Owen persisted in his quest to find Russian culpability.

I made these points repeatedly in communication with the British authorities and in the articles that I authored.

Owen tried to squirm around these issues by requesting that his work be converted from a coroner’s inquest to an official government inquiry. That would allow him to avoid the public scrutiny attached to an inquest and carry on what he was doing in secrecy.

The Berezovsky crowd made this sound like an honest search for the truth. But of course it was quite the opposite. It simply was an attempt to advance Berezovsky’s fabrications. Nonetheless, his team’s extensive PR efforts resulted in mainstream acceptance of Berezovsky’s specious story.

It took great courage for May to go against that tide. She denied Owen’s request for a government inquiry, told him to knock-off the improper criminal investigation, and to concentrate on his yet-to-be-performed statutory duty: to simply rule on the manner and cause of death.

Owen was unhappy with this outcome but wrote, “I have therefore reluctantly come to the conclusion that Russian State responsibility should also be withdrawn from the scope of the inquest.”

May had scored a great victory against the dark forces that aimed to provoke menacing tensions between the UK and Russia. Good for her. The witch hunt was closed down.

THE BAD. Unfortunately May’s instructions to Owen were far from succinct. They wandered into secondary issues and that unfortunately presented opportunity for contesting her instructions. If she had employed the basic points I articulated in my communications, the lid she put on Owen’s scandalous inquisition likely would have been firm and enduring. But she went into other issues.

For instance, she had been baited by the Berezovsky clan’s claim that Britain was reluctant to finger Putin out of a desire to improve relations with Russia. May took the bait, and in her instructions to Owen she explained:

“It is true that international relations have been a factor in the government’s decision-making.”

That became the world headline. It seemingly vindicated the Berezovsky group’s allegation.

What many news reports left out is that May went on to add:

“However, this has not been a decisive factor and if it had stood alone would not have led the government to refuse an inquiry.”

This all turned out to be a bungling misstep that invited a legal appeal. I think May should have been more astute than to have fallen into the Berezovskyesque trap. In the end, May was ordered by the court to clear up her instructions to Owen.

THE UGLY. Before May had a chance to comply with the court order, something very dramatic intervened. It was the take-down of flight MH17 over eastern Ukraine on July 17, 2014.

That incident pushed Cameron into a hissy fit against Russia. Just three days after the crash, before any reasonable examination of the facts could possibly have been made, Cameron went on a rant. The Daily Mail for July 20 reported: “Furious Cameron warns Putin over jet outrage and tells him: ‘You have contributed to an appalling tragedy.'” The sanctions frenzy against Russia gained traction.

And two days later, Theresa May issued the following statement:

“I am announcing today the government’s decision to establish an inquiry under the Inquiries Act 2005 to investigate the death of Mr. Alexander Litvinenko in November 2006. The inquiry will be established by the Home Office. The inquiry will be chaired by Sir Robert Owen, a senior judge who is the current coroner in the inquest into Mr. Litvinenko’s death. “

With those words May reopened the fact-free hunt for Russian culpability that she had bravely quashed earlier. Now she was throwing courage and principle to the wind.

So here’s the final question: Which Theresa May will we see in her prime ministership?

– The courageous champion of truth and political sanity?

– The inartful bungler of important communications?

– Or, the spineless official who capitulates to political pressure and expediency?

Let’s hope that May’s bad and ugly actions were merely aberrational, and that honest and politically sane policies and initiatives will prevail during her important tenure as prime minister.