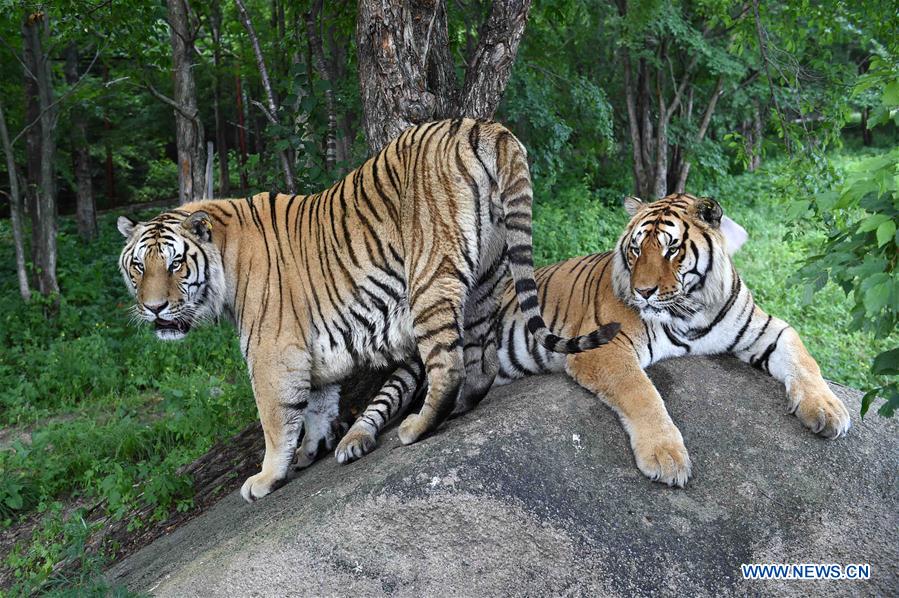 While torrential rain has wreaked havoc across southern China, the north is in the midst of a heat wave, and while humans can escape to air-conditioned rooms, the endangered Siberian tiger is not so fortunate.

At a Siberian tiger breeding park in Hengdaohezi Township, Hailin City, in northeast China’s Heilongjiang Province, more than 400 Siberian tigers must endure temperatures exceeding 30 degrees Celsius, which must be unbearable for the thick-furred species.

The tigers appear despondent and move around very little, said Qiu Hongkun, one of the park keepers. “Some have even lost their appetites,” Qiu added.

Around noon, the tigers can be seen panting, and many have taken cover from the baking heat in the shade of trees. They hardly react when their feeders release live chickens in their enclosure, according to Qiu.

Qiu and his colleagues have to bang on the fence and yell at the tigers to wake every noon. “If they fall asleep under the scorching sun, they will likely get sunstroke,” said another park employee.

“Siberian tigers with thick layers of fat and fur prefer the cold weather. They really suffer from the heat in summer,” said Qiu. “They are much more active during the winter snows.”

Tiger cubs are even more vulnerable to the heat. They just stay in their dens on hot days, Qiu said.

Water is a necessity during the peak of the summer, which is expected to last for about half a month in the region. To provide sufficient water for the tigers to drink and bathe, the park has diverted the neighboring river into the park.

“They like to soak in the water and only keep their heads above,” Qiu said.

“If a tiger gets heatstroke, we will treat them immediately,” said Qiu, who is also one of the park’s vet.

The park opened in 1986 with eight Siberian tigers. Now, there are more than 400. Every year, about 50 tiger cubs are born there.

Siberian tigers are among the world’s most endangered species. They mostly live in eastern Russia, northeast China and northern parts of the Korean Peninsula. The wild population is about 500 in the region.