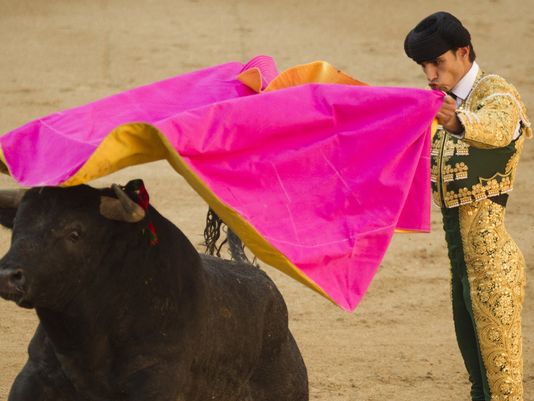 A top Spanish bullfighter has been gored to death in the ring during a fight observed by hundreds of horrified spectators. He is the first person to have died at a bullring in the country this century.

Victor Barrio, 29, was killed on Saturday (July 9) when a bull’s horn ripped through the man’s chest. The fight was being staged in the town of Teruel in the eastern region of Aragon. The performance ending with Barrio’s death was also broadcast on television.

This is the moment top Spanish Matador Victor Barrio is gored by a bull in Teruel, Aragon

The last matador who was killed during a bullfight in Spain was Jose Cubero, also known as Yiyo, in 1985. Manolo Montoliu and Ramon Soto Vargas were the last bandilleros, or matador’s assistants, that died at a bullring, both in 1992.

Barrio’s wife was among the audience who watched the tragedy happen before her own eyes. The moment he fell on the ground other matadors rushed to help. Barrio was taken to the hospital, but doctors said they were unable to save him.

Barrio was pronounced dead at the scene. The website of Madrid’s Las Ventas bullring at which Barrio began as an apprentice, confirmed his death.

The same day another Spaniard was killed during a bull-run that took place in a village near Valencia. Two other people were gored to death at the festival in the town of Pamplona.

Around 2,000 bullfights are held in Spain annually. According to El Pais, as many as 134 people were killed by bulls in Spain in the past century. While some condemn the event as barbaric, others support the long-established tradition.

In 2010, Catalonia became the second Spanish region after the Canary Islands to ban the tradition.