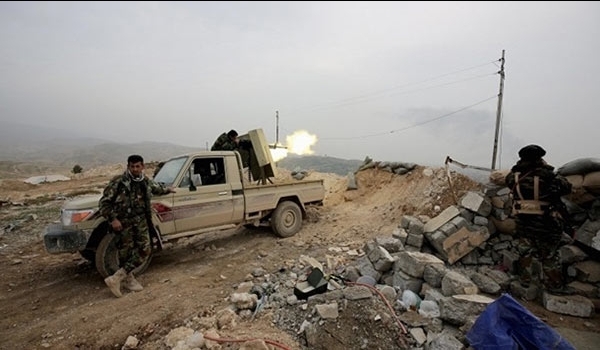 The Syrian Democratic Forces (SDF), in their mop-up operation on the Southern side of the town of Manbij in Northeastern Aleppo, discovered a large depot of ISIL arms and ammunition left behind by the terrorist group.

The SDF fighters, who repelled heavy offensives of the ISIL from three flanks in the Southern countryside of Manbij, seized a large volume of weapons, ammunition, grenades, bombes and other explosive devices in battlefield.

The SDF, meantime, buried bodies of tens of the ISIL members killed in Manbij’s Southern battlefield.

Kurdish sources announced on Monday (July 4) that at least 169 ISIL terrorists were killed and many more were wounded in heavy fighting with the SDF on the Southern side of the town of Manbij.

“The ISIL terrorists stormed the SDF’s positions from three fronts of Nahr al-Sajour, West of al-Arimeh town and South of the village of Khirbet al-Rous towards Owseh Jeli to lift siege on Manbij, but their attacks were unsuccessful and in an eleven hours battle the SDF fighters pushed them back, which ended in the killing of at least 88 terrorists,” the sources said, adding, “In the meantime, the SDF fighters clashes with the ISIL in the Northwestern side of Nahr al-Sajour, between the villages of al-Rafieh, Dadat and Um Adseh, which claimed the lives of at least 60 militants.”

“The ISIL also clashed with the SDF fighters near the Manbij-Jarabulus road which also claimed the lives of 21 Takfiri terrorists,” the sources said.