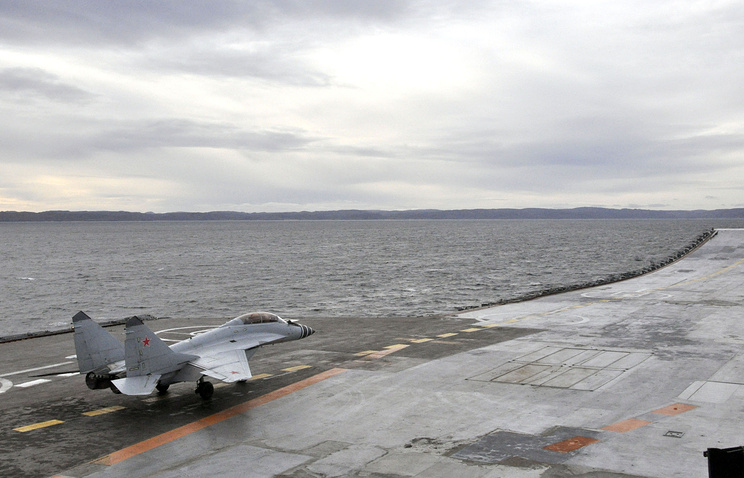 Aircraft of Admiral Kuznetsov to be used in Syria Oct-Jan

The deck aircraft of the Admiral Kuznetsov carrier will participate in delivering strikes against militants in Syria from an eastern part of the Mediterranean Sea in October 2016 – January 2017, a military-diplomatic source in Moscow told TASS on Saturday (July 2).

“The General Staff has prepared a plan for involvement of the deck aircraft in delivering strikes on terrorist groups in the Syrian Arab Republic, where the crews will practice taking off the carrier to deliver strikes on ground targets.”

Thus, the source said, in autumn-winter, the strikes will be delivered both by the crews located at the Hmeymim Base, and the aircraft carrier’s crews “in most close coordination.” “The Admiral Kuznetsov,” which will lead the Russian Navy’s permanent grouping in the Mediterranean Sea, will be close to the Syrian shore “so that the deck aircraft have enough fuel to complete the military tasks and return back,” the source said.

During the voyage, the source continued, the Admiral Kuznetsov “will have about 15 fighters Su-33 and MiG-29K/KUB and more than ten helicopters Ka-52K, Ka-27 and Ka-31.”

“The aircraft carrier will come to the Mediterranean Sea roughly before end of January – early February, after that it will return home and in February-March it will undergo maintenance and modernization in Severodvinsk, supposedly at Sevmash,” the source added.

TASS does not have official confirmation of this information.

A military and diplomatic source told TASS earlier that the aircraft carrier Admiral Kuznetsov would arrive in the eastern part of the Mediterranean Sea in autumn. The ship is currently undergoing shipbuilders’ trials in the Barents Sea after repairs.