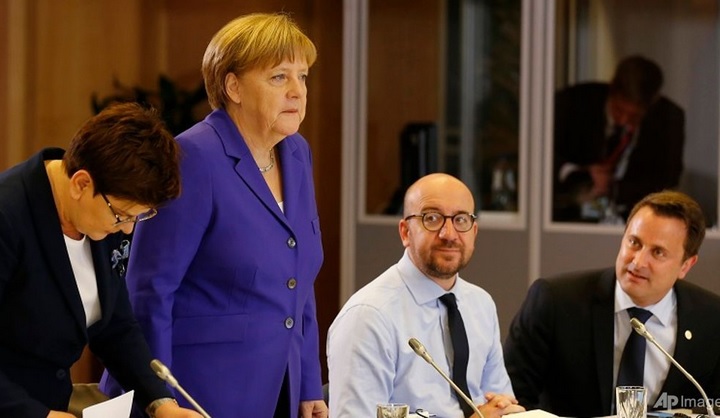 EU leaves Britain out in the cold as PM race begins

European leaders met on Wednesday (Jun 29) without Britain for the first time in 40 years to prepare for life after the Brexit bombshell, as the race began to succeed Prime Minister David Cameron.

Highlighting the seismic shock from last week’s referendum, one person who was in Brussels however was Scottish First Minister Nicola Sturgeon, “utterly determined” to see Scotland remain in the EU.

Britain “made the decision that it did. And this morning it looks like they aren’t sitting at the table any more,” European Commission President Jean-Claude Juncker said as he arrived Wednesday.

At a summit described as “sad” on Tuesday, Cameron won some breathing space from the remaining 27 leaders of the bloc five days after Britain rocked financial markets by voting 52 to 48 per cent to leave the bloc.

EU President Donald Tusk said he understood that time was needed “for the dust to settle” before the next steps can be taken.

However, Juncker warned Britain did not have “months to meditate” before triggering Article 50 – the EU treaty clause that begins the two-year withdrawal process – after Cameron’s successor takes office in early September.

And German Chancellor Angela Merkel warned that London could not “cherry-pick” the terms of the exit negotiations.

Some in Brussels are concerned that giving Britain favourable divorce terms will spark a domino effect of others leaving the union, set up six decades ago to foster peace on the continent after World War II.

“We need more than ever a united Europe, in contrast to a disunited UK,” Luxembourg’s Prime Minister Xavier Bettel said Wednesday.

CAMERON OUT, STURGEON IN

Cameron flew back to London after Tuesday’s summit, as Sturgeon headed in the opposite direction to test the waters in Brussels for her country joining the bloc as a separate entity.

Scotland overwhelmingly backed “Remain” in last Thursday’s vote, and the combative Sturgeon has said she was “utterly determined to preserve Scotland’s relationship and place within the EU”.

That may require a new referendum on Scottish independence, with Sturgeon saying that the Britain from the last vote in 2014 “does not exist any more” following the Brexit vote.

Sturgeon met on Wednesday morning with European Parliament President Martin Schulz and was to hold talks with Juncker later.

Top of the agenda at Wednesday’s EU meeting was how the remaining 27 members can bolster unity after the shock of the British vote.

Cameron has urged a reform the rules of freedom of movement, with officials seeing the large influx of eastern European workers as a key factor behind the referendum outcome.

Merkel has called for a “new impulse” for the EU and stepped-up cooperation in areas including defence, jobs and competitiveness.

Meanwhile, both main political parties in Britain are in turmoil with the opposition Labour leader Jeremy Corbyn refusing to resign despite a crushing no-confidence vote.

Within the governing Conservatives, nominations opened Wednesday for a successor to Cameron. The cut-off is noon on Thursday and the winner will be named on September 9.

Pro-EU finance minister George Osborne, long seen as a possible Cameron successor, has ruled himself out.

Boris Johnson, the charismatic blond-mopped former London mayor and a leading Brexiteer, was expected to throw his hat in the ring along with Interior Minister Theresa May.

A new poll Tuesday put May in the lead with 31 per cent, against 24 per cent for Johnson.

Meanwhile, on Tuesday thousands protested in London, which voted to stay in the EU by a 60-per cent margin, waving EU flags and placards saying: “Stop Brexit” and chanting “Fromage (cheese), not Farage!”.

Nigel Farage, head of the UK Independence Party and key figure in the “Leave” camp, told a jeering European Parliament on Tuesday that the joke was now on those who never expected Britain to leave the EU.

“When I came here 17 years ago and I said I wanted to lead a campaign to get Britain to leave the EU, you all laughed at me,” he said. “But you are not laughing now.”