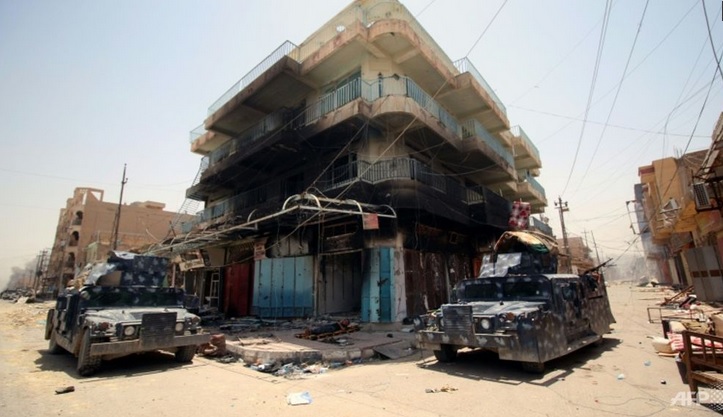 IS gone but some Fallujans shun return to ‘cursed city’

When her five-year-old son asked her to kill him because he was too hungry, Umm Issam knew she would never come back to Fallujah if she was able to leave.

An Iraqi woman displaced from the city of Fallujah carries a child at a newly opened camp where hundreds of Iraqis are taking shelter in Amriyat al-Fallujah on Jun 27, 2016.

On June 26, The Iraqi forces  wrapped up operations in Fallujah and declared the area free of militants of the Islamic State (IS) group after a month-long operation.

The government said the destruction caused by the fighting was limited and vowed to do its utmost to allow the tens of thousands of displaced civilians to return to their homes.

After more than two years under the tyrannical rule of IS and months of a siege that starved the population, Umm Issam, 42, said she thought she could never be happy in Fallujah again.

“My son asked me to kill him because he was so hungry he couldn’t take it anymore… By God that’s what he said. He’s five,” she said, shaking her head.

Months earlier, she had a miscarriage in Fallujah hospital when an air strike hit a nearby building and caused panic.

“I was so scared, it was chaos, I miscarried. I was expecting twins. I lost my twins … I had gone to hospital because I had no food,” she said, holding one of her nine other children.

Behind her, in one of the ever-expanding displacement camps in Amriyat al-Fallujah, the Norwegian Refugee Council was conducting a delivery of basic goods for new arrivals.

The basic package, meant for a family housed in a single tent, consisted of six mattresses, a cooking kit, a camping lamp, a sheet of tarpaulin, an empty water container and brown tape.

“It’s hot and dusty here, there isn’t enough water or food, but we can survive,” said Umm Issam. “I don’t want to go back. It has been through so much – the Americans, Al-Qaeda, Daesh (IS), starvation … And I don’t know what’s next but this city is cursed, I’m not going back.”

Her husband has been detained for screening since they reached the camp on June 16.

While military operations in the area are all but over, the humanitarian crisis is peaking and the number of displaced is continuing to grow.

Temperatures topping 45 degrees Celsius (113 Fahrenheit) combined with a lack of basic goods and even shelter for some of the displaced families have prompted aid groups to warn of an impending disaster.

Kefieh Saleh has been in the same camp 10 days and her family still does not have a tent to sleep under. “My husband, as we speak, is working for the camp to help set up tents but we don’t have one of our own. Can you imagine?,” she said.

Members of the Iraqi police force celebrate on a street on Jun 27, 2016 in western Fallujah.

She and her children share the grounds of the camp’s prefab mosque and have been sleeping outside, sitting on a dirty black blanket with their backs propped up against the wall.

“Our area is not safe, and I don’t believe it’ll get better,” said the woman, from the Saqlawiya area northwest of Fallujah.

In his victory speech from central Fallujah Sunday, Prime Minister Haider al-Abadi said a demining effort was needed before civilians could return. “God willing, we will bring them back to their areas after we guarantee that the houses are safe and not booby-trapped,” he said.

Sectarian dynamics are also an obstacle to the return of displaced residents filling overwhelmed camps around Fallujah. “Many of the men have disappeared, some of our neighbours were slaughtered by the Hashed al-Shaabi,” she said.

She was referring to a paramilitary umbrella dominated by Iran-backed Shiite militia that have been accused of being driven by the desire for revenge against Fallujah’s Sunni population.

Witnesses, local officials and rights groups have reported sectarian-tainted abuses by Hashed forces that were in charge of clearing Fallujah’s outlying areas in the early stages of the operation.

“I’m not sure what happened to our house yet but in any case it’s like living in a military area out there, I’m afraid of what can happen,” she said. “In God’s name I won’t go back, I’ll look for another place that’s safe. Maybe Arbil or Sulaimaniyah in Kurdistan.”