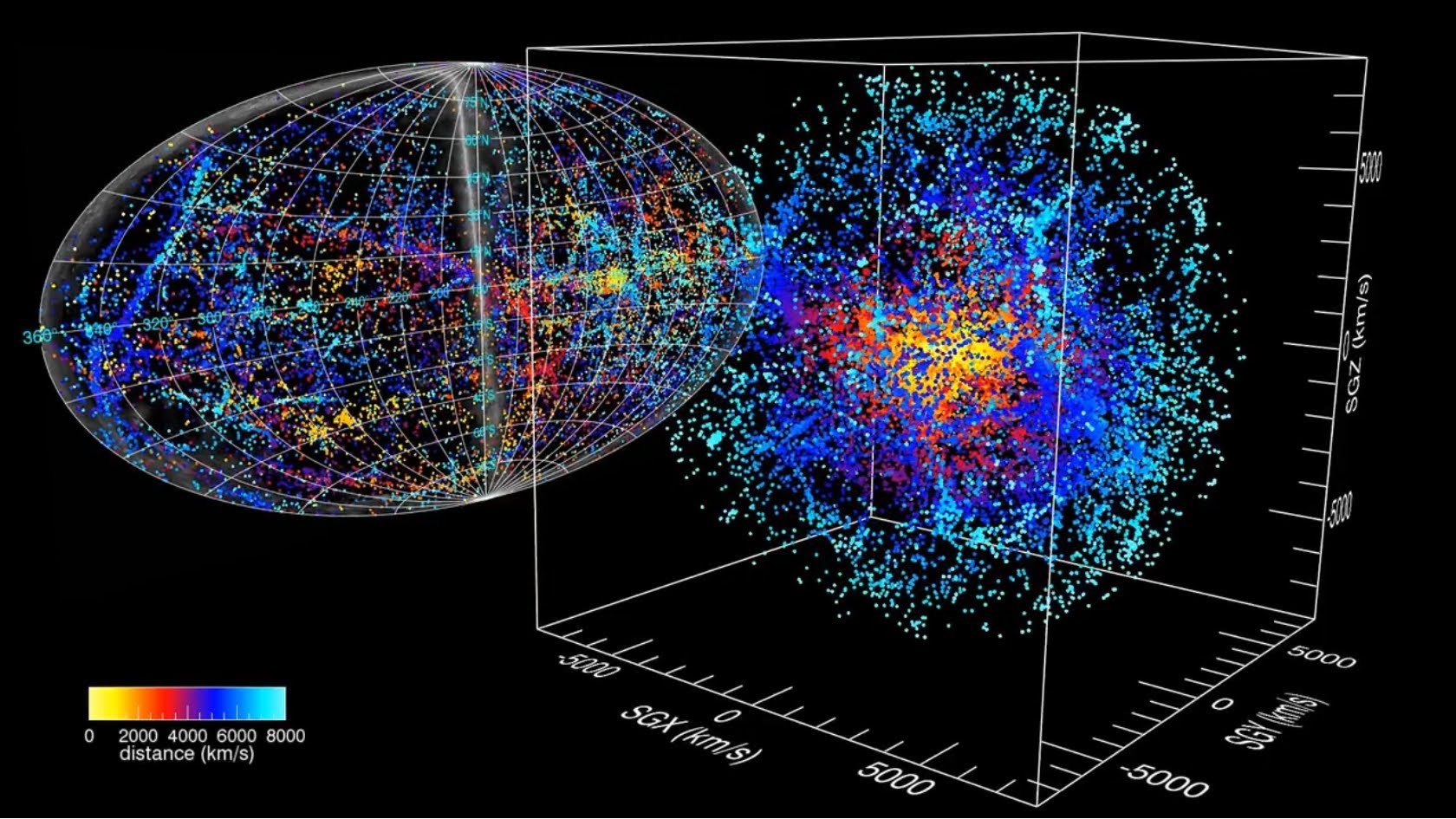 One hundred years after Einstein introduced general relativity, it remains the best theory of gravity, the researchers say, consistently passing high-precision tests in the solar system and successfully predicting new phenomena such as gravitational waves, which were recently discovered by the Laser Interferometer Gravitational-Wave Observatory.

The equations of general relativity, unfortunately, are notoriously difficult to solve. For the past century, physicists have used a variety of assumptions and simplifications in order to apply Einstein’s theory to the universe.

In a simulation of the universe without commonly made simplifications, galaxy profiles float atop a grid representing the spacetime background shaped by the distribution of matter. Regions of blue color contain more matter, which generates a deeper gravitational potential. Regions devoid of matter, darker in color, have a shallower potential.

On Earth, that’s something like averaging the music made by a symphony. The audience would hear a single average note, keeping the overall beat, growing generally louder and softer rather than the individual notes and rhythms of each of the orchestra’s instruments.

Wanting details and their effects, U.S. and European teams each wrote computer codes that will eventually lead to the most accurate possible models of the universe and provide new insights into gravity and its effects.

While simulations of the universe and the structures within it have been the subject of scientific discovery for decades, these codes have made some simplifications or assumptions. These two codes are the first to use Einstein’s complete theory of general relativity to account for the effects of the clumping of matter in some regions and the dearth of matter in others.

Both groups of physicists were trying to answer the question of whether small-scale structures in the universe produce effects on larger distance scales. Both confirmed that’s the case, though neither has found qualitative changes in the expansion of the universe as some scientists have predicted.

“Both we and the other group examine the universe using the full theory of general relativity, and have therefore been able to create more accurate models of physical processes than have been done before,” said James Mertens, a physics PhD student at Case Western Reserve University who took the lead in developing and implementing the numerical techniques for the U.S. team.

The researchers say computers employing the full power of general relativity are the key to producing more accurate results and perhaps new or deeper understanding.

“No one has modeled the full complexity of the problem before,” Starkman said. “These papers are an important step forward, using the full machinery of general relativity to model the universe, without unwarranted assumptions of symmetry or smoothness. The universe doesn’t make these assumptions, neither should we.”

Both groups independently created software to solve the Einstein Field Equations, which describe the complicated interrelationships between the contents of the universe and the curvature of space and time, at billions of places and times over the history of the universe.

Comparing the outcomes of these numerical simulations of the correct nonlinear dynamics to the outcomes of traditional simplified linear models, the researchers found that approximations break down.

Bentivegna said that their preliminary applications of numerical relativity have shown how and by how much approximations miss the correct answers. More importantly, she said, “This will allow us to comprehend a larger class of observational effects that are likely to emerge as we do precision cosmology.”

“There are indeed several aspects of large-scale structure formation (and their consequences on, for example, the cosmic microwave background) which call for a fully general relativistic approach,” said Sabino Matarrese, professor of physics and astronomy at the University of Padua, who was not involved in the studies.

This approach will also provide accuracy and insight to such things as gravitational lensing maps and studying the cross-correlation among different cosmological datasets, he added.

The European team found that perturbations reached a “turnaround point” and collapsed much earlier than predicted by approximate models. Comparing their model to the commonly assumed homogeneous expansion of the universe, local deviations in an underdensity (a region with less than the average amount of matter) reached nearly 30 percent.

The U.S. team found that inhomogeneous matter generates local differences in the expansion rate of an evolving universe, deviating from the behavior of a widely used approximation to the behavior of space and time, called the Friedmann-Lemaître-Robertson-Walker metric.

Stuart L. Shapiro, professor of physics and astronomy at the University of Illinois at Urbana-Champaign, is among the acknowledged leaders of solving Einstein’s equations on the computer. “These works are important, not only for the new results that they report, but also for being forerunners in the application of numerical relativity to long-standing problems in cosmology,” said Shapiro, who was not involved in the studies.

No longer restricted by the assumptions, researchers must abandon some traditional approaches, he continued, “and these papers begin to show us the way.”

Bruni said galaxy surveys coming in the next decade will provide new high-precision measurements of cosmological parameters and that theoretical predictions must be equally precise and accurate.

“Numerical relativity simulations apply general relativity in full and aim precisely at this high level of accuracy,” he said. “In the future they should become the new standard, or at least the benchmark for any work that makes simplifying assumptions.”

Both teams are continuing to explore aspects of the universe using numerical relativity and enhancing their codes.

Bentivegna and Bruni used the Einstein Toolkit, which is open-source, to develop theirs. The U.S. team created CosmoGRaPH and will soon make the software open-source. Both codes will be available online for other researchers to use and improve.