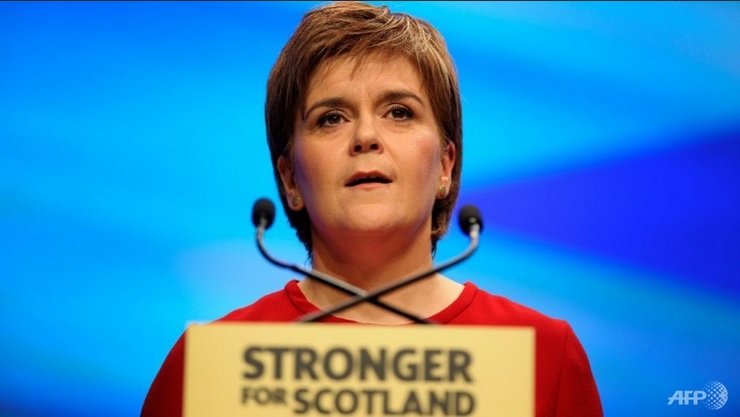 First Minister Nicola Sturgeon vowed on Sunday (Jun 26) to protect Scotland against the “devastating” fallout of Brexit, as new polls found over half of Scots now want independence, which she may put to a second referendum.

Scotland had rejected independence in a 2014 referendum but Sturgeon said the landscape had changed since then due to Thursday’s seismic national vote to leave the European Union.

The United Kingdom – as it was when Scotland voted to stay in it – “does not exist any more”, she said.

After the result became clear, Sturgeon said that a new independence vote within two years was now “highly likely” and that Scotland was seeking “immediate discussions” with European leaders.

“What’s going to happen with the UK is that there are going to be deeply damaging and painful consequences … I want to try and protect Scotland from that,” Sturgeon told the BBC’s Andrew Marr Show.

Scots rejected independence two years ago by a margin of 55 per cent to 45 per cent, but surveys taken after Thursday’s vote showed most would now back going it alone.

A Panelbase survey for the Sunday Times found 52 per cent of respondents wanted to break with the rest of Britain, while 48 per cent were opposed.

In another poll for Scotland’s Sunday Post by research firm Scotpulse, 59 per cent said they would vote for independence.

In a round of broadcast interviews, Sturgeon also said it was possible that the Scottish parliament may have to give its consent to laws to extricate Britain from the EU.

Asked whether she would consider asking Scottish lawmakers not to give that consent, she replied: “Of course.”

However, Adam Tomkins, an opposition Scottish lawmaker and professor of public law at Glasgow University, said the government did not have the right to bloc a Brexit.

“Holyrood has the power to show or to withhold its consent,” he wrote on Twitter, referring to the seat of government in Edinburgh. “But withholding consent is not the same as blocking.”

Sturgeon leads the pro-independence Scottish National Party, which has 63 out of 129 seats in the devolved parliament, as well as 54 out of 650 seats in Britain’s House of Commons lower house of parliament.

Setting out Scotland’s negotiating position with Brussels, Sturgeon said that the country would not need to rejoin the EU as a new member state because it would never leave. “Our argument is that we don’t want to leave. It’s not that we want to leave and get back in,” she said.

She also cautioned any future British prime minister against vetoing a new Scottish independence vote. “I think people in Scotland would find that completely unacceptable,” she said.

Andrew Scott, a professor of European Union studies at the University of Edinburgh, said Scotland could vote for independence before Britain’s departure is finalised. It could then define itself as a “successor state” and effectively inherit Britain’s EU membership, including the budget rebate, he argued.

A second option would be for an independent Scotland to leave the EU and then re-apply while in the meantime joining the European Economic Area, he said.

EU officials have cautioned in recent days that Scotland may have to apply like other new member states.

On the streets of Edinburgh, many people backed independence.

Chris Dougray, a financial advisor, said he was concerned about the impact on investment in Scotland if it is forced out of the European Union. “If it meant that we stay in the European Union, I would vote for independence, yes,” he said.

Zoe Cuthbert, a 23-year-old student of international law, said: “I feel more European than I do British. “We’ve clearly made our voice heard that we look more to Europe than we do to the rest of the UK.”