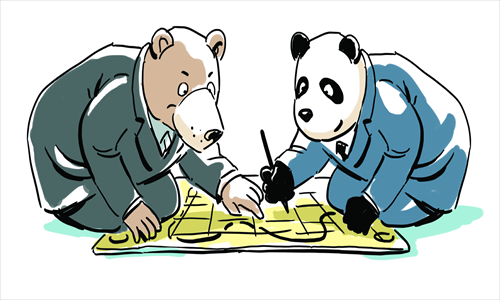 Russian President Vladimir Putin is to visit Beijing Saturday. Before Putin’s tour, Alexander Gabuev (Gabuev), senior associate and chair of the Russia in the Asia-Pacific Program at the Carnegie Moscow Center, and former member of then president Dmitry Medvedev’s press corps, shared his views over this high-level visit as well as Sino-Russian ties with Global Times (GT) reporter Li Aixin.

GT: What do you think will be on the agenda of Putin’s visit this time?

Gabuev: Chinese President Xi Jinping and Russian President Vladimir Putin see each other quite often, at least three times a year. There is one bilateral visit at least, and there are some international forums like the G20 or APEC, where they have chances to see each other. Usually there are baskets of regional issues, global issues and bilateral issues.

On the bilateral track, the most important thing will be the economy, and some deals that are expected to be signed. I expect a deal on the high-speed railway that Chinese construction firms will be building between Moscow and Kazan. A lot of sub-contractors and manufacturers will be Chinese companies. I think this is the most important deal during this trip.

On regional issues, North Korea will be a big topic, because after the January tests that North Korea conducted, the US has moved to deploy the Terminal High-Altitude Area Defense system in South Korea, which is of joint concern to both Russia and China.

Russia was trying to win China over in the debate over the US missile defense system in Europe, but that was too far away from China. Now it’s next door to both China and Russia. The two need to figure out a joint strategy.

There will be discussions over the Trans-Pacific Partnership, the big trade arrangement which is pushed by Washington and its allies. Both China and Russia are outside of this agreement. I think Putin will find ways to cooperate with China on this.

GT: Some scholars say that Russia takes Central Asia as its “backyard.” Hence Moscow does not wish to see other major powers’ presence in this region, including China. Do you agree?

Gabuev: It’s true that a lot of Russians, particularly in the leadership, are concerned about growing presence of China in Central Asia. They think it is really a sphere of influence in our backyard, which is essential for Russian interests, and it needs to be protected.

The issue is that Russia is much more accommodating to Chinese presence than to the US and other players’ presence, because it sees China as also sharing this neighborhood. From a geographical point of view, it is also China’s backyard.

About pipelines and oil prices, Russia was not concerned about China because the most important thing for Russia was to protect its European market share. As long as China was removing volumes of oil and gas which could potentially go to Europe, it was good for Russian interests.

Now Russia is entering into China’s oil and gas market. It faces competition, but that’s the result of previous choices, so if Russia isn’t happy about that, it shouldn’t blame anyone except itself. My personal answer would be that Russia should diversify the routes so it shouldn’t be building pipelines linking to China alone, but to build it to the Pacific Ocean, where there are different customers.

GT: What is Russia’s stance on the South China Sea issue?

Gabuev: Russia’s stance is pretty clear and pretty consistent – it doesn’t support any of the claimants; it doesn’t take any view on who gets what, or the history, and is neutral on the outcomes. But Russia is not neutral on the process of negotiation.

It either supports China or is more on the Chinese side of the debate. Not because it wants to support China, but I think that supporting bilateral mechanisms as opposed to international courts or arbitration is more in line with Russia’s position.

If it comes to talks regarding Crimea’s status in the future, where Russia definitely says there is no problem, but for Ukraine there is a problem, Russia would prefer direct talks with Kiev, rather than some international mediation or tribunal that would look into the legality of the claims. So here it really supports China.

GT: The EU’s sanctions against Russia, currently set to expire on July 31, are to be renewed for a further six months. Russia has been seeking dialogues to remove the sanctions, what do you think is Moscow’s biggest obstacle?

Gabuev: Sanctions are tied to the implementation of Minsk agreement, which includes among many other things holding elections in accordance with Ukraine’s laws, and removing a lot of systems and personnel which are still there.

Russia officially claims that there are no Russian troops or Russian military advisers.

But from what you see in public, you would see definitely that there is some Russian presence backing up the rebels and Russian high-level officials have admitted that there are so-called volunteers there.

The other obstacle is a lot of issues and obligations that Ukraine took cannot be implemented because of the current political climate in Kiev.

That’s the stalemate, where Russia needs to convince the EU that it’s not because of Russia, but because of Ukraine, that the Minsk deal hasn’t been implemented. Some of the sanctions may be removed. But I am not very optimistic about full removal of the sanctions.

We see some positive moves in the exchange of high-level prisoners. That’s good development.

Hopefully, if more and more of these measures can be done, we will see some relaxations of the sanctions in the future. But I don’t expect full relaxation any time soon.