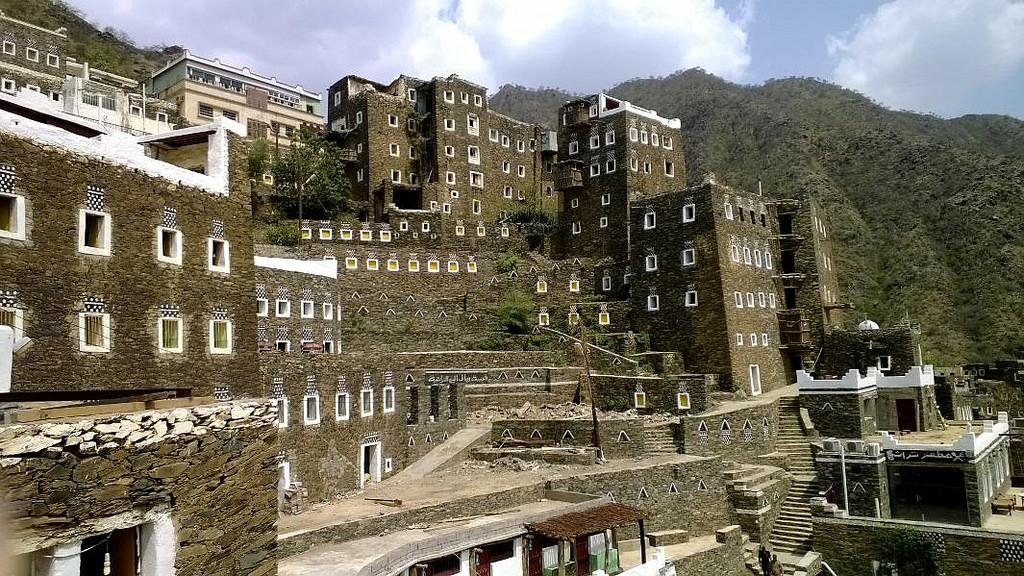 Saudi heritage revival too late to save many cultural treasures

If Rijal Almaa, a stone village tucked into a fold of Saudi Arabia’s southern mountains, showcases the polished end-point of new efforts in the kingdom to preserve cultural heritage, the hamlet of Watan Emsoudah represents the difficulties faced.

Its low-covered alleyways lie thick with the debris of decades of abandonment, some stone house roofs have caved in and thistles grow high between the hamlet’s walls, but near the entrance three men are working to save a house.

Saudi Arabia has allocated nearly US$1 billion to preserve its heritage in a new reform plan, but after decades of neglect, and in some cases deliberate destruction, saving its cultural treasures will prove complex and expensive.

While that money was allocated in a National Transformation Programme unveiled this month, no details were given as to how it would be spent and the only tourism projects listed in the plan were for a few large sites.

“For maybe 40 years we stopped using these old houses and every five years you need to rehabilitate them,” said Abdulaziz al-Ghanem representative of Asir’s architectural heritage centre at the government’s General Commission for Tourism and Antiquities. “I hope we get more money. We need it.”

Watan Emsoudah is one of around 4,000 old villages in Asir Province in the kingdom’s southwest and the project to restore it to save architectural tradition and boost tourism is one of eight in the region by a local investor.

Rehabilitating the village, swaddled by terraced fields in a shallow bowl on a mountain plateau, will cost around 6 million riyals (US$1.6 million), says Ibrahim al-Almiy, a former history teacher and the local investor behind these projects.

That high cost – for one tiny village in a country where most old dwellings were deserted for modern concrete houses after last century’s oil boom – shows how little of its heritage Saudi Arabia may be able to protect even with new investment.

Although the capital Riyadh is a low-rise sprawl of highways and modern, concrete shopping malls, the towns of the Red Sea coast and the southern highlands still contain some fine buildings in their historic old quarters.

Some good mud buildings survive in the central regions of the country, including the ruling al-Saud family’s restored historical capital of Diriyah just outside Riyadh, but as these areas originally were mostly populated by tent-dwelling nomads, the architectural legacy was scarce.

In its efforts to end reliance on oil for economic wealth, Riyadh wants to invest in tourism, aiming to increase spending by Saudis at home instead of on holidays abroad, and by pilgrims to Mecca at other attractions around the country.

There is also an ideological agenda to such efforts: restoring cultural sites occupied a prominent place in Deputy Crown Prince Mohammed bin Salman’s Vision 2030 reform plan as a means of boosting national pride.

Encouraging visits to local places of beauty or interest is a key goal and Saudi Arabia has some world-class sites, some in remote areas, that are all but unknown outside the kingdom.

The spectacular rock-hewn Nabatean tombs of Madain Saleh, the ornate facades of Jeddah’s coral-built old town and the ancient rock art hidden among the boulders of the northern deserts constitute an inheritance unique to the kingdom.

But previous efforts to protect cultural heritage were directed only at a few landmark sites while rapid development fuelled by oil wealth and a lack of interest in preserving traditional architecture has allowed others to crumble.

Ironically, given the focus on religious tourism, recent destruction has mostly been in Mecca. Its old houses, including some dating to the time of the Prophet Mohammed, have been razed for development projects to increase pilgrimage.

That approach was partly a result of the austere local Sunni Muslim tradition, which regards the veneration of objects, including buildings associated with Islam’s earliest days, as tantamount to idolatory. The focus on national and even pre-Islamic heritage today shows one way in which religious strictures are loosening.

The road from Watan Emsoudah to Rijal Almaa descends Mount Souda in hairpin bends as the juniper scrub of the cool upper slopes gives way to the humid heat of the Red Sea coastal plain.

The example of Rijal Almaa, where investment of 4 million riyals over the past three years has created from the village an attraction that is now prominently featured in Asir province’s tourist literature, shows how restoration projects can succeed.

While its spectacular setting in a mountain valley and the towering size of its stone houses, decorated with chequerboard patterns in quartz, gives it advantages some other old villages lack, Almiy believes this model could be emulated.

He envisages a trail of restored villages through Asir’s mountains, each reflecting a different element of the region’s unusual architectural heritage and adding to the flow of local tourists drawn by the region’s clement summer weather.

But money is a big problem. Almiy, who lived in an old house in Rijal Almaa until the age of 16, is an independent investor and his projects were carried out in partnership with government agencies, which provided some money and official blessing.

Still, the government has so far invested so little in local heritage that it does not even have a register of traditional architecture in Asir or neighbouring provinces where most towns and villages have crumbling old houses.

Even in central Abha, the capital of Asir, local custom is celebrated in traditional motifs added to concrete buildings while actual mud houses in the unique highland style, with slate courses providing a serrated effect, fall to ruin.

“In five or 10 years this will all collapse. The rain comes and the houses fall. There has to be investment. The state needs to invest,” said Almiy, standing in Abha’s al-Basta district where a cluster of old houses is gradually disintegrating.

It is a pattern repeated across the country: In Najran, a fertile valley running between steep dry hills into the Empty Quarter desert, clusters of adobe tower houses with distinctive horizontal ribs nestle among the fields.

Some are clearly looked after by their owners, but most are slowly eroding, their lack of care causing such structural damage that wide cracks are opening down their flanks or that the towers are starting to list dangerously to the side.

The spending envisaged on tourism and heritage in the new reform plans, however, seems likely to focus mostly on big projects. Widescale investment is planned near Madain Saleh and on some Red Sea islands rich in marine wildlife.

However, Saudi heritage was given a boost in 2014 when the United Nations cultural body UNESCO listed old Jeddah as a world heritage site. It presents some of the same preservation challenges as the villages of Asir, where like in Jeddah, most old houses are privately owned and some are in grave disrepair.

“When I was young we didn’t know the importance of these buildings. In those days we cheered when they knocked them down for a new road. But now we have managed to safeguard the architecture,” said Sami Nawar, mayor of Jeddah’s old city.

The humid climate rots the houses’ wood and erodes walls, demanding constant repair, and the magnificent buildings of the seventh-century old town are inhabited by poor foreign labourers instead of the merchant elite for whom they were built.

The UNESCO listing has helped to ensure a brighter future for old Jeddah’s 600 historical houses, built of coral and with delicate wooden screens ornamenting their imposing facades. It galvanised state investment and a restoration plan.

In Asir, any such holistic approach still appears a long way off. “Saving our heritage is a national project. It’s for the whole nation. But I don’t think there’s going to be any investment soon,” said Almiy.